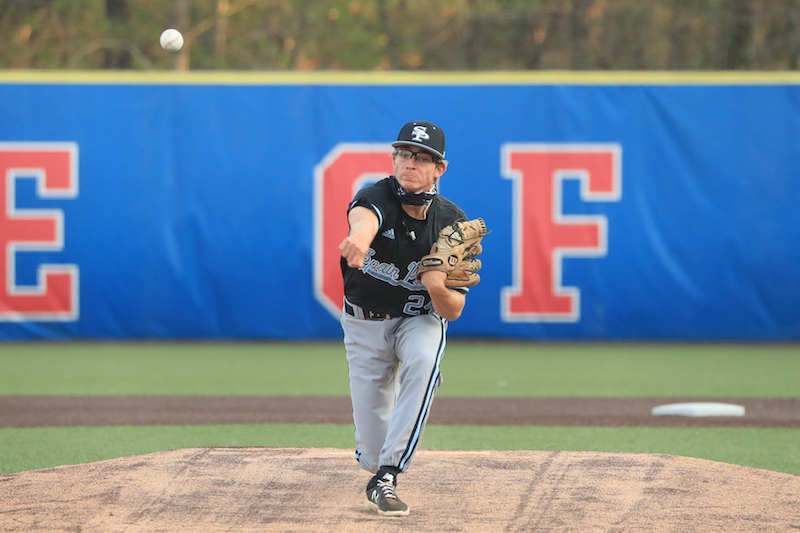 Harrison Holcomb allowed one hit and two runs in five innings of work to pick up the win against area foe Gadsden City on Tuesday, April 13. (For the Reporter/Dawn Harrison)

HOOVER – Trailing 2-1 after giving up two runs in the top of the third, the Spain Park Jaguars dug deep and responded in the bottom half with two runs of their own on Tuesday, April 13.

Taking on Gadsden City in an area game with each contest leaving a crucial mark on the playoffs, the Jags needed the response to take the lead, and it ended up making the difference in what became a 3-2 win.

The inning started with a groundout, but Cole Edwards started the rally with a walk following a seven-pitch battle.

Trent Thompson then stepped into the batter’s box and drove Edwards home with a fly ball to center field that got down for an RBI double to even the score at 2-2.

Following a second out, pitch command became the difference in the final score when a passed ball allowed Wilkins Hunter to advance to third on a passed ball before scoring two pitches later.

From there, Harrison Holcomb and John Robert Thompson finished off a spectacular night on the mound.

Holcomb got the start and went on to pick up the win after pitching the first five innings of the game and giving up just one hit. He gave up two runs on one hit and four walks, but allowed no hits and just two walks after the Jags took the lead.

Thompson then came in and finished off the game by striking out four batters in two innings to pick up the save.

At the plate, Spain Park took the early 1-0 lead when Trent Thompson followed an Edwards single with an RBI single.

That held up until the Titans scored two in the top of the third on a two-RBI single.

Following his hit in the first, Trent Thompson also picked up the big hit in the third and finished the game 2-for-3 with two RBIs. Edwards, Michael Glick, Charlie Goodwin and Josh Harrington all had one hit.