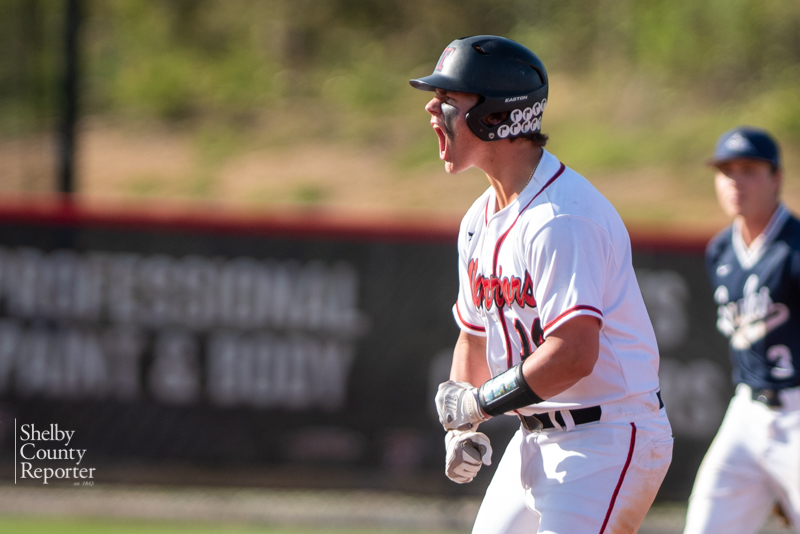 Thompson took down Tuscaloosa County 8-4 on April 13 thanks to a strong night from Ben Pearman, who posted two hits and two RBIs in the win. (Reporter photo/Keith McCoy)

TUSCALOOSA – The Thompson Warriors bounced back with a crucial area win on Tuesday, April 13, on the road at Tuscaloosa County.

The Warriors got off to a solid start in area play against Oak Mountain last week with a win in their opener, but went on to lose the second game of the series and the tiebreaker game.

But on Tuesday night, Thompson looked like a team determined at the plate, scoring eight runs on eight hits to take down Tuscaloosa County 8-4.

The Warriors started the scoring in the opening inning thanks to the first of two doubles on the night from Ben Pearman, who drove home Aaron Shoop for a 1-0 lead.

Trey Puckett then stepped in and brought Pearman home on a ground ball through the left side of the infield to make it 2-0 Thompson after one inning of play.

After a quiet second inning, the Warriors added to their lead in the top of the third. Following a leadoff walk to Logan Braunschweig and a single from Shoop, an error by the pitcher allowed Braunschweig to cross the plate.

Thompson added two more in the inning on a sac fly from Puckett and a wild pitch to extend its lead to 5-0.

Tuscaloosa County broke into the score column in the bottom of the fourth with a run, but Thompson came right back with two in the top of the fifth.

Cade Watts helped spark the inning with a single before Pearman doubled to put two runners in scoring position. Following a second out, Connor Gregory came through with a single to right field to make it 7-1.

Thompson then loaded the bases in the top of the sixth, but only drew one more run on a bases-loaded walk from Pearman.

Tuscaloosa County looked to mount a comeback in the bottom of the sixth but only managed three runs, leading to the 8-4 final.

Pearman finished 2-for-3 with two RBIs, two runs scored and one walk to lead the Warriors. Puckett and Gregory each added two RBIs on one hit, while Shoop added two hits. Watts and Tucker Arrington each picked up one hit.

Braxton Turnbow got the start on the mound and struck out eight to earn the win. He allowed one run and three hits in the victory.