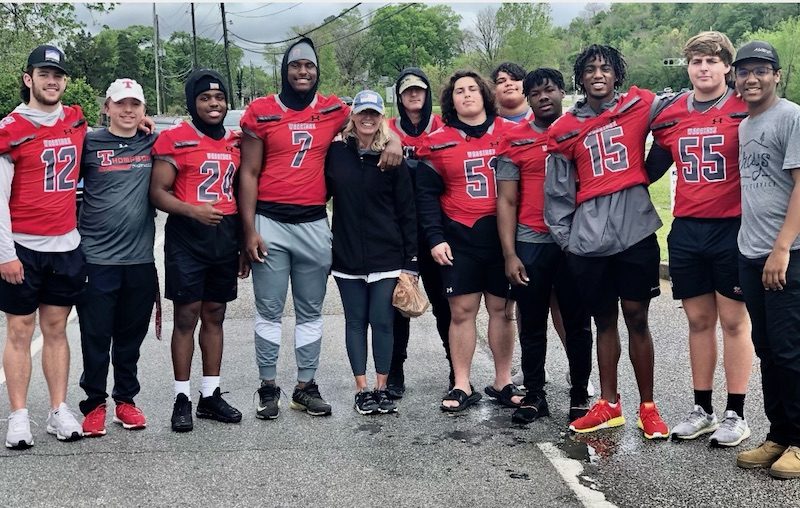 Despite some rain, volunteers including THS football players, came out to help make the Alabaster Clean Sweep event a success. (Contributed)

ALABASTER – The city of Alabaster conducted its eighth annual Clean Sweep event on April 10, which successfully collected tons of bags of trash and litter to prevent pollution in the area.

According to City Council member Stacy Rakestraw, the city sponsors this event each year as an iniative to bring awareness to litter and provide the community an opportunity to get out and make a difference to prevent the litter.

“This was the City’s Eighth Annual Clean Sweep E-Cycle and Shred-It event.  We appreciate Jeff Atkins and the Alabaster City Schools working with us to host the event at their Board of Education building,” Rakestraw said. “This weekend we have about 40 volunteers picking up litter on 10 miles of roadways in the City.”

The event saw many organizations including local students, public officials, community members and other groups come out to help make the effort a success.

“We had 25 Thompson High School football players volunteer their morning from 7:30 a.m. until noon greeting residents, unloading vehicles, and helping the event run smoothly,” Rakestraw said. “Margaret Dawson of the Alabaster Beautification Board was also a great help again this year serving in that capacity. We had other volunteers that were residents, church groups, and the Alabaster City School Key Club.”

Rakestraw said that through their recycling program they were able recycle a large amount of old electronics. She said that the estimated weight for these items was approximately 6,579 pounds, or 3.3 tons.

They also collected shredded paper, which ended up weight approximately 19,000 pounds or 9.5 tons.

America’s Thrift Store also participated in the event, by collecting gently used clothing, shoes, household items, furniture, electronics and toys that will go to benefit families in need and help to keep trash out of landfills.

This event has taken place since 2012, and has since become an annual way for residents to come together as a community for a good cause.