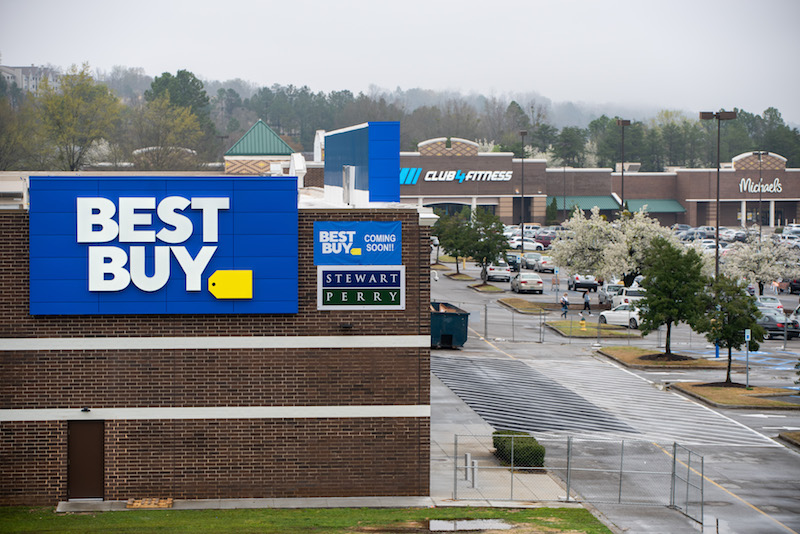 The new Best Buy location on U.S. 280 in the Brook Highland Shopping Center has opened after moving from a few miles down the road. (Reporter photo/Keith McCoy)

NORTH SHELBY – Best Buy has officially opened a new store location in the Brook Highland Plaza shopping center on U.S. 280. The electronics retailer held the grand opening for the store on April 2, which was the culmination of nearly a two-year relocation effort, according to Bear Burnett, who represented Best Buy during the transaction of the property.

Burnett, a partner with the Birmingham-based real estate firm The Canvass Group, said that his conversations with Best Buy about relocating the company’s U.S. 280 store began in 2019.

The store was previously located in the River Ridge Shopping Center further down the highway near Target, but Burnett said Best Buy had been wanting to increase the company’s presence in the 280 area, which made Brook Highland Plaza the ideal location.

Burnett approached Best Buy about buying the property following the announcement that Dick’s Sporting Goods would be relocating.

In addition to direct highway visibility, some other factors that Burnett said influenced the company’s decision to relocate to this location was the building’s additional space and expansive parking.

According to Burnett has become increasingly popular in recent years.

“With such an expanded parking field, and it being on an endcap, they now have their own separate entrance for customers who have bought online and in-store. They also have more dedicated parking spots for those options as well,” he said.

Burnett said the Shelby County area also played a role in the relocation, especially along Chelsea and the Highway 280 corridor. According to Burnett, these areas have experienced massive growth over the past decade, making the area a keen market for retailers.

“Oftentimes, commercial follows residential, and Highway 280 is very busy as it is, and it is going to continue to grow. Shelby County and southeast Birmingham is where I anticipate the most growth, population-wise, for the city of Birmingham over the next 20 years,” he said.

Burnett said Best Buy’s decision to relocate closer to these communities indicates that the company is making long-term investments in Shelby County, and that the company will likely continue to expand into the area for years to come, especially as Chelsea and other areas along U.S. 280 and Alabama 119 continue to grow.

“They want to continue to serve that customer, and when retailers this size make a decision like this, it is a long-term decision,” he said.

Katie Huggins, a representative for Best Buy, said the company’s new store location on 280 will give customers easier access and will provide a larger assortment of products, including an enhanced appliance section and a premium audio department.

“We’re excited about our new store location and look forward to serving our customers in the Birmingham community,” she said.