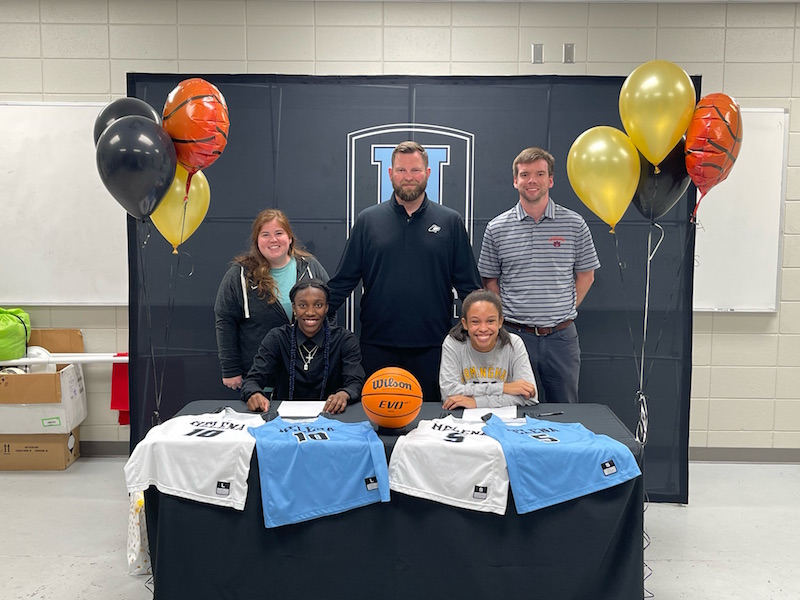 HELENA – This year’s senior class for the Helena girls’ basketball team left a mark on the program, and will now carry into a new program after two of those seniors signed to continue being teammates on Wednesday, April 15.

Following one of the most historic seasons in school history with a trip to the postseason in Class 6A, Jessica Powell and Montana Harris sat in front of family and friends inside the school’s athletic facility and signed to play college basketball together at Birmingham Southern College.

“I tell them to use ball, because they work very hard, so they need to get some long satisfaction out of it,” Helena head coach Alan Skinner said. “I tell them all the time to let sports be a vehicle for you. Use it up, whether it be going to school, all of the things you might learn, all the resources you can use from an academic standpoint, all the relationships you are going to build and all the experiences you’re going to have. We are so proud of them to get this opportunity.”

During their senior seasons, Harris and Powell both finished in double figures on multiple occasions with Harris going on to be the county’s second leading scorer.

They both helped the Huskies finish 11-14 this season and second in the area behind Pelham, who advanced to the Sweet 16.

They also helped the Huskies improve drastically throughout the season to win five of six games during an important stretch of area play.

Helena just missed winning the area championship this year, losing to Pelham by two points in the final minute of the area title game, and almost took down Wetumpka to advance to the Sweet 16 but fell by just six points.

Now, Powell and Harris will get an opportunity to continue feeding off each other as teammates at the next level.

They’ll also be joining former Oak Mountain head coach and current BSC assistant Alan McGowan, who Skinner said has watched them grow up on the court.

“He didn’t just see them at a camp or at a tournament one or two times, he’s seen this kids from when they were little all the way up to now,” Skinner said. “He has a good gage for the quality of human beings that he is going to get, and I know that both of these kids are plenty smart enugh to handle Birmingham Southern and plenty good enough to handle Birmingham Southern. I’m just glad basketball is going to be an opportunity they’re going to get to further their education and further themselves.”

Now, the two Helena stars will trade in their silver, black and bright blue for the gold and black of Birmingham Southern looking to leave their next mark.