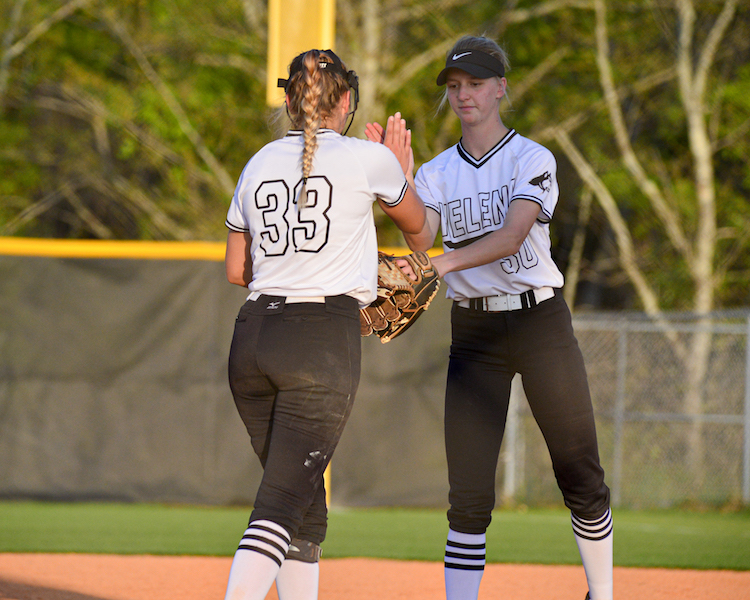 The Helena softball team won three games in a row at the Cullman tournament to improve to 33-8 on the season. (For the Reporter/Jeremy Raines)

CULLMAN – Despite losing in the semifinals of the Cullman tournament to the host school, the Helena Huskies now have the most wins in Shelby County after going 3-1 at the tournament.

With the three wins, the Huskies improved to 33-8 this season, giving them three more wins than Thompson and Spain Park who both have 30 on the season.

As the No. 2 team in Class 6A, Helena has proven itself to be a state championship contender, and that continued in this tournament against some of the state’s best talent.

The Huskies opened the tournament against Tuscaloosa County and scored nine runs on nine hits in a 9-2 victory against the Wildcats.

They scored one in the first and two in the third to take a 3-1 lead through four innings, but it was a six-run fifth inning that made the difference.

Helena was led by Ann Marie Stanbridge with two hits and two RBIs, while Cam Bailey added one hit and two RBIs. Alana Scott and Alex Erwin also had two hits, while Erwin added an RBI.

In addition to that, Juju Wilkins added a hit and one RBI, while Emma Bjornstad went 1-for-2. Bailey picked up a complete-game win with five strikeouts in the circle.

The Huskies followed that up with a tight one-run win against West Point. After a four-run first inning, the Huskies were able to take a 5-1 lead in the top of the third, but West Point battled back to score three in the bottom of the third.

Stanbridge, however, got the Huskies out of the jam and finished off the final 1 2/3 innings allowing two hits, striking out two and not giving up a run to give Helena a 5-4 win.

Bailey again led the way with two RBIs on one hit, while Sara Ezekiel also had one RBI. Scott, Emily Crowe, Stanbridge and Elise Dufour all had one hit in the win.

Helena then picked up its third win of the tournament a day later on Saturday, April 17, thanks to a no-hit performance from Lexie Bullock.

Bullock gave up one unearned run but only walked two and struck out seven to pick up the no-hitter in a 7-1 win.

The Huskies helped her confidence in the circle with five runs in the first and two more in the second to put together a comfortable cushion early in the game.

Stanbridge led the way with one hit and two RBIs, while Scott finished 2-for-3 with a run scored. Erwin and Wilkins each finished 1-for-2 with an RBI.

In the 5-1 loss to Cullman, Helena scored one run in the first, but the Bearcats put together two in the opening inning and followed with two in the third and one in the fifth, while the Huskies only picked up four hits in the game.

Bullock led the way with a 2-for-2 game, while Holliday and Ezekiel added the other two hits.

Get to know Athlete of the Week Sydney Aldrich