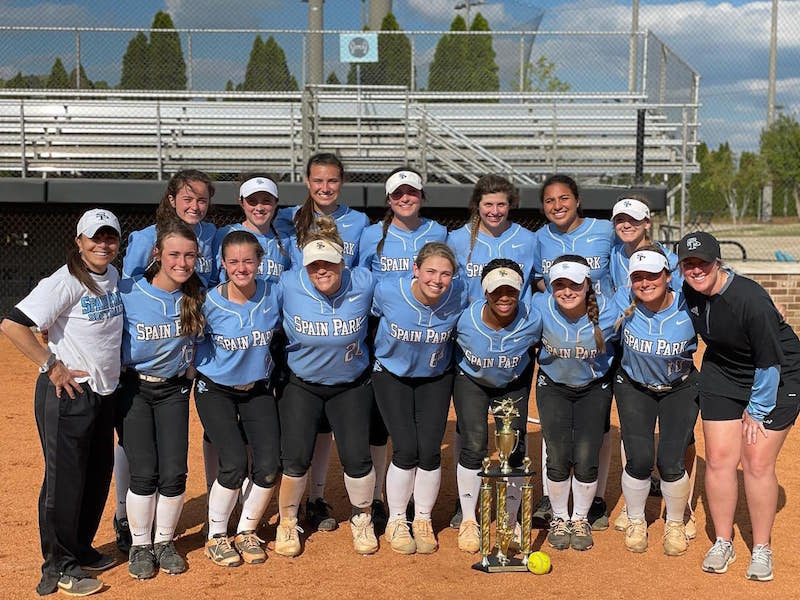 The Spain Park Jaguars won the Cullman tournament thanks to five consecutive wins, including a walk-off win against the host team in the championship. (Contributed)

CULLMAN – In a tournament featuring some of the state’s best teams, the Spain Park Jaguars didn’t flinch en route to winning five games in a row to become champions of the Cullman tournament.

The Jags, who are rounding into form ahead of the postseason, picked up their 30th win to close out the tournament thanks to a one-run 3-2 victory against host Cullman.

It was a game that saw Spain Park fall behind 2-0 in the top of the first, but the Jaguars battled back quickly.

In the bottom of the first, the Jaguars put together their first response with a solo home run from senior leader Annabelle Widra. She stepped to the plate with two outs and took the second pitch she saw over the center-field wall to cut the deficit to 2-1.

The Jaguars then tied the game in the bottom of the third thanks to a sac fly. After Lucy Spisto walked to lead off the inning and Emma Hawkins reached on a ground ball, Lydia Coleman hit a fly ball to center field that allowed Spisto to score on a sac fly.

What became key after that was the pitching of Ella Reed and the defense behind her. The Bearcats put runners on base several times throughout the rest of the game, but Reed and the defense found ways out of every jam and didn’t allow another run following the two in the first.

That set the stage for Coleman to play the role of hero in the bottom of the fifth.

Needing a run to win, the Jags already had two outs on the board following a groundout and strikeout.

But Coleman settled in for a battle.

After battling to a full count, she took the sixth pitch of the at bat and drove a long shot deep to center field that cleared the wall for a walk-off homer and a 3-2 win in the championship game.

Coleman finished the game 1-for-3 with a game-high two RBIs, while Widra added a 1-for-2 performance featuring one RBI. Reed had five strikeouts and gave up six hits to take the win in the circle.

With the win, Spain Park won its 19th game in the last 20 matchups.

It also marked the second of two wins against Cullman in the tournament for the Jags, who beat the Bearcats 5-1 to open the tourney.

Spain Park scored three in the second and two in the fourth and gave up just one in the top of the fourth to grab the win. Blakley Watts led the way with three RBIs behind a 1-for-1 game that included a home run.

Reed struck out five and gave up three hits to pick up the win.

In the second game of the tournament, the Jaguars picked up a 4-0 shutout after scoring four runs in the first three innings behind a strong game from Katie Flannery who went 1-for-2 with two RBIs. Watts added two hits and one RBI, while Widra had one hit and one RBI.

Widra also pitched three perfect innings in the circle with six strikeouts, while Katherine Brown finished off the final two innings with a strikeout.

Brittain went 3-for-3 with an RBI, while Widra went 2-for-3 with two RBIs. Coleman also had two RBIs with one hit, while Maggie Daniel, Watts and Hawkins each had one hit and one RBI.

Reed and Brown combined to allow five hits and four runs with six strikeouts in a combined effort in the circle.

In the semifinals, Spain Park took on Corner for the second time and fell behind 1-0 in the top of the third.

Then, after three scoreless innings, the Jags finally broke through in the score column with four runs in the bottom of the fourth.

Spain Park ended up getting big hits from Flannery, Daniel, Brittain, Watts, Charlee Bennett and Spisto, while Bennett added two RBIs. Flannery and Watts each added one RBI as well.

Widra put together a dominant outing in the circle with 0 strikeouts. She gave up two hits and allowed one unearned run.

Get to know Athlete of the Week Sydney Aldrich