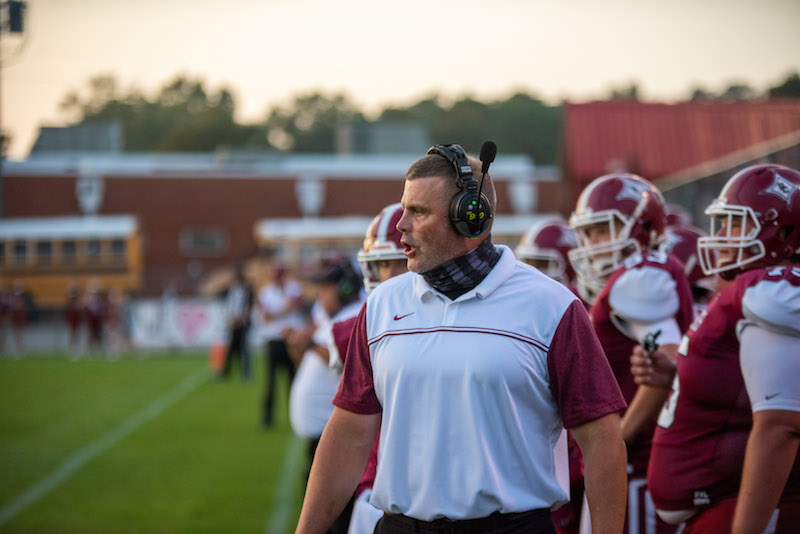 Shelby County head football coach Heath Childers is leaving the school to take over the same position at Red Bay after spending the last seven seasons with the Wildcats. (File)

After seven seasons leading the Shelby County Wildcats as their head football coach, Heath Childers has made the difficult decision to take on a new challenge.

On Tuesday, April 20, Childers was officially approved as the next head coach of the Red Bay Tigers at a Franklin County School Board meeting.

“It was really hard,” Childers said of the decision to leave Columbiana. “In some form, I’ve been a part of this community for 15 years now, and I’ve loved every second of it.”

The decision also came after Shelby County’s most successful season since 2009.

Childers helped lead the Wildcats to a 6-4 record and the playoffs during the 2020 season, giving them their first winning season and playoff berth since the 2009 season.

Childers finished 26-44 overall as the head coach of Shelby County, but also put together the team’s best offense in school history. His teams scored 1,816 points over the past seven seasons. The only total higher was Don Bulger, who spent nine seasons as the head coach and led the Wildcats to 1,883 points. Ryan Herring also led the team to 1,748 points in his six seasons from 2006-2011.

Now, Childers will look to take the next step in his career leading Red Bay, but he knows his time at Shelby County will always mark some of the most special of his career.

“Being the head football coach here has been the greatest experience of my life,” he said. “I’m so blessed and fortunate to have coached all of the football players that have come through the program. I’m going to miss all of them. It definitely was not an easy decision.”

He also thanked the administration and community for making Columbiana feel like home.

Childers will now take over for former Red Bay head coach Michael Jackson, who left for the same position at St. John Paul II in Huntsville.

Jackson went 63-17 in his seven years leading the Tigers, who went 9-2 last year and have lost no more than three games the last three years.

It’s a step that Childers is excited for, but he said he knows the time spent at Shelby County has helped prepare him for this next stop.

The search for the next coach at Shelby County is underway, and will likely be a quick process with spring football kicking off. Childers said he had confidence the administration will find the right fit for the Wildcats.