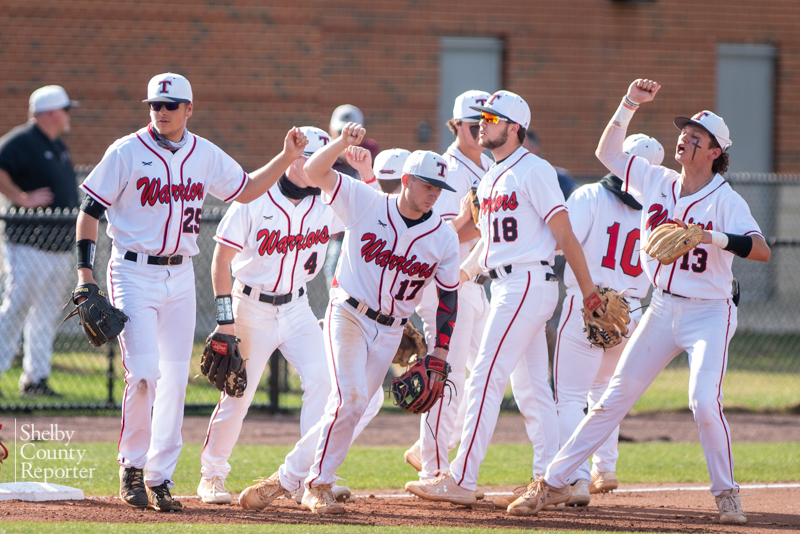 Thompson’s baseball team clinched a spot in the playoffs on Tuesday, April 20, thanks to a 2-1 victory against Hoover. (Reporter photo/Keith McCoy)

ALABASTER – In the biggest game of the season, Ben Pearman and Braxton Turnbow stepped up on Tuesday, April 20 to send the Thompson Warriors to the postseason.

Needing a win to avoid possibly falling into a tie with Oak Mountain, who held a tiebreak advantage over the Warriors, the duo played a crucial role in helping Thompson take down rival Hoover 2-1 and clinch a playoff berth.

Pearman had both RBIs in the victory, driving home one in the first and one in the fifth, which made the ultimate difference in the score column, while Turnbow pitched a complete game and gave up five hits and one run with four strikeouts.

Pearman got his night started in the bottom of the first. Following an error that allowed Logan Braunschweig to reach safely and Aaron Shoop being hit by a pitch, Cade Watts bunted both into scoring position.

That’s when Pearman stepped up and hit a ground ball toward shortstop that allowed Braunschweig cross the plate for a 1-0 lead.

It looked like that might be enough for a while after Turnbow got through four innings without giving up a run, but the Buccaneers tied the game in the top of the fifth.

The Bucs got a lead-off double and a sac bunt to move a runner to third base with one out. A sac fly then allowed the game-tying run to come home.

After a quick two outs in the bottom half of the inning, the Warriors started a rally when Watts drew a four-pitch walk.

That brought Pearman back to the plate. After a swing and miss for strike one, he drove the second pitch deep to center field that got down and allowed Watts to score all the way from first on an RBI double.

With that, Thompson took a 2-1 lead and Turnbow capitalized on the mound.

He put Hoover down in order in the top of the sixth and allowed just one more base runner the rest of the way with a two-out walk in the top of the seventh. Turnbow, however, followed that with a strikeout to end the important win.

Pearman finished the game 2-for-3 with two RBIs, picking up two of Thompson’s three hits in the game, while Turnbow added the other hit. Watts had two walks and a run scored, while Braunschweig had one walk and one run scored. Gavin Chandler also drew two walks at the plate.