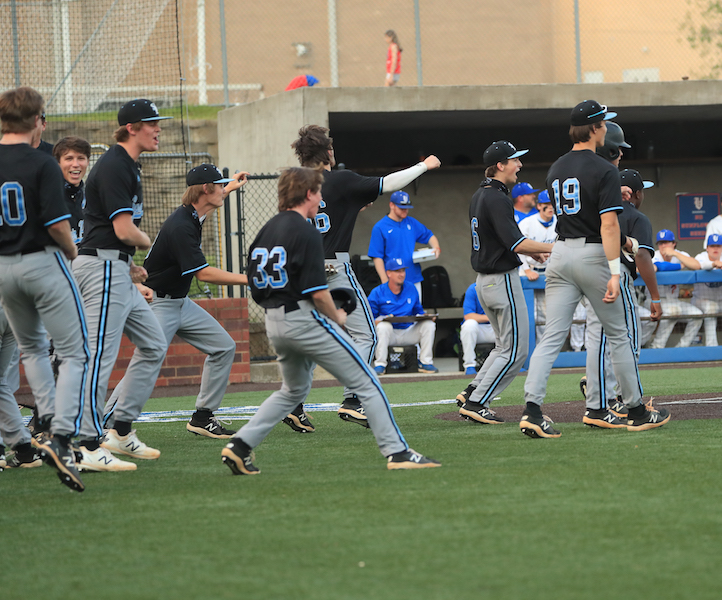 TRUSSVILLE – When it came down to the biggest moment of the season, the Spain Park Jaguars didn’t back down on the road against Hewitt-Trussville on Thursday, April 22.

Needing a win against the Huskies in the area finale to advance to the postseason, the Jags broke open a scoreless game with two runs in the top of the fifth and added two more in the top of the seventh to pick up a 4-2 victory and cement their playoff spot.

Jake Majors on the mound was a big reason the Jags were able to be patient at the plate and didn’t have to press in the first four innings at the plate.

Majors pitched six scoreless innings and only allowed five baserunners in that span, which kept the Jaguars in the game until the offense could find its moment to break through.

That came in the top of the fifth when Charlie Goodwin reached on an error at shortstop following a six-pitch at bat. A sac bunt moved him to second before a walk to Brooks Ballintine and a single from Josh Harrington loaded the bases with one out.

A strikeout followed and Spain Park didn’t get another hit in the inning, but an error at shortstop again off a ground ball from Evan Smallwood led to Goodwin scoring, while a bases-loaded walk to Cole Edwards brought home Ballintine for a 2-0 lead before a fly out ended the threat.

Hewitt put one on base in the bottom half, but couldn’t find a run, while the sixth inning saw the two teams go down in order.

In the top of the seventh, however, the Jaguars struck again with two insurance runs. It started on a walk from Ballintine and another single from Harrington to quickly put two aboard for Conner Eberhardt.

Eberhardt grounded into a fielder’s choice that allowed Ballintine to score from third.

Spain Park then added its fourth run of the game after a sac bunt and a walk set the stage for Eberhardt to score on a wild pitch.

Those two runs in the seventh became key as Hewitt-Trussville attempted a rally in the bottom half.

Back-to-back walks put two aboard for the Huskies quickly before two outs were recorded. A hit batter then loaded the bases before a two-RBI single brought the Huskies to within two runs.

An error then allowed the next batter to reach and load the bases once more, as the Huskies looked for a walk-off win.

But to follow up Majors’ strong start on the mound, John Robert Thompson was able to finish the game off with an emphatic strikeout to send the Jags to the postseason.

Majors had five strikeouts and gave up two hits and two runs, both of which came in the final inning, in the win.

Edwards finished 2-for-2 with one RBI and two walks in the win, while Harrington finished 2-for-3. Eberhardt added one hit and one RBI, while Ballintine scored two runs on two walks.