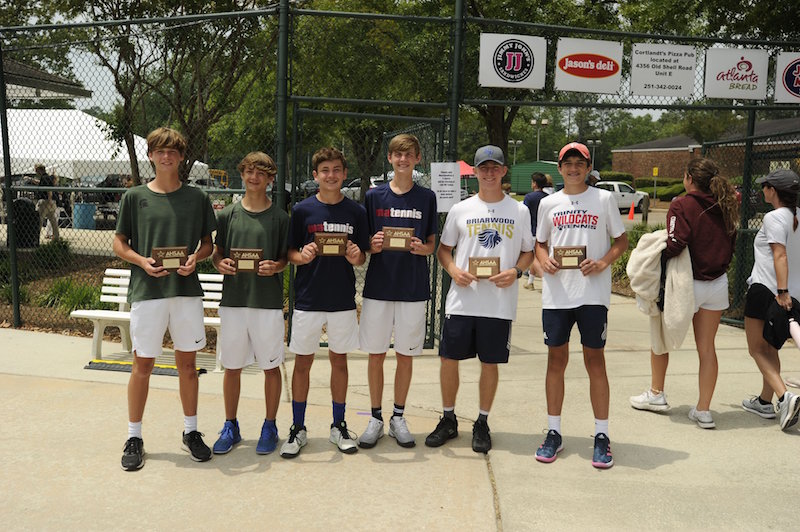 Briarwood’s Luke Wolf, second from right, was the lone state champion from Shelby County at the Class 6A State Tennis Tournament. (Contributed)

MOBILE – Competing in the 2021 AHSAA Class 6A State Tennis Tournament April 22-23 after dominating the 5A tournament two years ago by winning every singles and doubles match, the Briarwood Lions faced more challenges but still found success.

Luke Wolf was the lone state champion for Briarwood at the event after powering his way to three consecutive straight-set victories to claim the 6A No. 1 singles championship.

Wolf won his opening match 6-3, 6-0 to earn a spot in the quarterfinals where he grabbed another easy win by a final of 6-0, 6-1 to punch a ticket to the semifinals.

There, he picked up a 6-1, 6-3 win to advance to the championship against Chelsea’s Jordan Garrett. He finished off a dominant tournament with a 6-2, 6-1 win against Garrett to claim the title.

Briarwood had an athlete make it to the second round all six of the singles matches, while all of their doubles teams did the same thing with one making it to the championship match.

That helped the Lions total 38 team points to finish fourth in the team standings of a competitive battle that saw Montgomery Academy win with 52 points.

In No. 6 singles, Andy Wan had a strong day for the Lions as well after making it all the way to the championship match before losing 6-3, 6-4 to Mountain Brook’s Logan Woodall.

Joseph Hopkins made it to the third round before losing in No. 4 singles, while Alex Felts, Aubrey Middleton and Vance Hopkins all made it to the second round in their singles categories.

Hopkins and Wan teamed up for the best doubles performance for Briarwood. The duo made it to the championship match and lost where they lost in a third-set tiebreaker.

Chelsea and Helena’s boys teams both saw success at the state tournament as well.

The Hornets finished sixth as a team with 30 points, while the Huskies were just behind in eighth with 22 points.

Chelsea was led by Garrett, who won three straight-set matches to earn a spot against Wolf in the title match where he lost.

Blake Zinda and Robert Rebman both made it to the second round for Chelsea in singles, while Rebman teamed up with Sage Speer in No. 2 doubles to make it to the semifinals before losing.

Garrett and Zinda also had a strong doubles showing by teaming up to go all the way to the semifinals in a competitive No. 1 doubles competition.

Davis O’Connell and Andrew Jones in No. 3 doubles also made it to the second round, giving each Chelsea doubles team an appearance in at least the quarterfinals.

Helena was led by Luke Emerson and Carson Wood, who made it to the semifinals in their singles divisions, while Michael Maning made it to the quarterfinals in No. 5 singles.

Emerson and Sam Harrison teamed up to lead in No. 3 doubles and made it to the semifinals as well before losing 6-2, 6-2 to Montgomery Academy.

Helena’s Joana Atchley made it to the quarterfinals in No. 1 singles to lead the way for the Huskies, while Emma Cunningham and Anna Beth Goodman won a match in No. 3 doubles for the Huskies.

Chelsea Kathryn Moore and Samantha Kennedy performed well in No. 1 doubles with two wins to get to quarterfinals.