Cahaba Market next to Cavender’s expected to open this fall 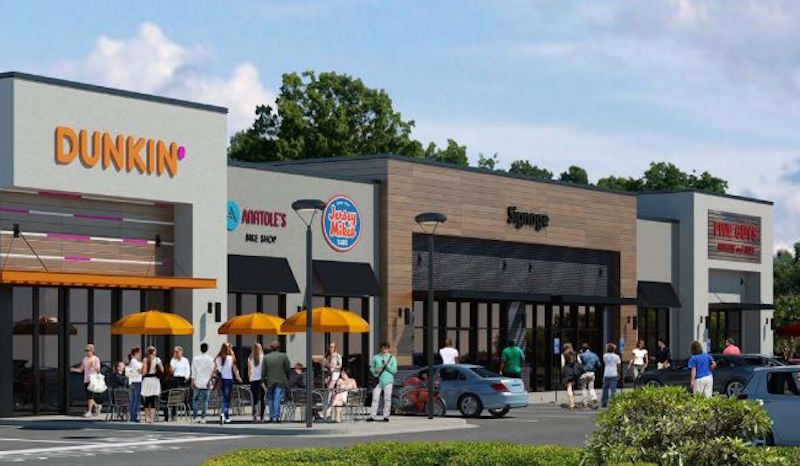 A new development near the intersection of U.S. 280 and Alabama 119 is expected to include a Dunkin’, Five Guys, Anatole’s Bike, Skateboard and Surf Shop and Jersey Mike’s Subs. (Contributed)

HOOVER – Cahaba Market, a new shopping center being developed near U.S. 280 and Alabama 119, is expected to open later this fall, according to the developer.

The 12,600-square-foot shopping complex is currently under construction next to Cavender’s Western Outfitter on U.S. 280 and is being developed by D&G Development Group, an Atlanta-based real estate firm. Vice President of Leasing for D&G Development Group Josh McBride said he anticipates the shopping center to be open to the public as early as September, with all construction expected to be complete by the fourth fiscal quarter of 2021.

The shopping center currently comprises six storefronts, four of which have already secured tenants. However, McBride expects one of the storefronts, a 3,500-square-foot building, to be divided into separate suites due to high interest in the property.

D&G Development Group initially purchased the property and has spearheaded much of the development over the last year. The firm submitted a formal proposal to the city of Hoover for the development project in 2020, and is now entering the final stages of construction.

McBride said that his firm had been looking to expand into the U.S. 280 corridor for some time due to the region’s massive growth over the past decade, which has made the area a keen market for retailers. The boom in residential communities near 280 has also played a factor in the development.

According to McBride, nearly 150,000 people currently live within a 5-mile radius of Cahaba Market, with Highway 280 having the highest flow of traffic in the area at over 50,000 daily vehicles. McBride said the surrounding residential communities will supply the shopping center with a steady stream of customers once it officially opens this fall.

“This is a part of 280 where there are a lot of new developments going on currently. A lot of businesses are growing and expanding here, and I believe the Tattersall Park behind us is a testament to that,” he said.

Each tenant will model the store’s interior to their custom brand. Other than installing basic utilities, McBride said he expects Dunkin’ and Five Guys to be fully operational this year and for the remaining storefronts to gradually open over the rest of the year.

“We’re anticipating delivering and being done with construction by the fourth quarter of this year, and we’ll then hand the keys over to the tenants at which point they will get in and actually finish the construction of the interior space,” he said. “I believe Dunkin and Five Guys will most likely open this year, but the rest may or may not and some of the actual business openings may go into January of 2022.”