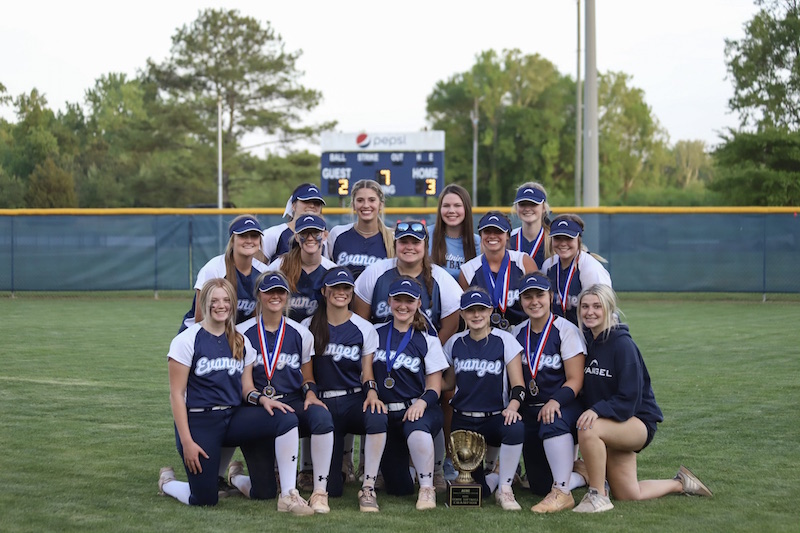 The Evangel Lightning softball team won the 2021 ACSC State Championship thanks to a 3-2 win against Ezekiel on Monday, April 26. (Contributed)

ALABASTER – With a runner on second base and one out in the bottom of the sixth in a tie game, Evangel Christian School’s Meyers stepped to the plate looking to make the difference in a state championship.

She stepped to the plate with not only the game tied 2-2 but the championship series tied 1-1 with the next run likely determining the champion.

In an eight-pitch battle at the plate, Meyers took that last pitch and lined it to center field to bring home Ivie Littleton, who singled and stole second earlier in the inning, to give the Lightning a 3-2 lead.

Olivia Renta then came out and got the first two outs in the top of the seventh looking to finish off the complete-game win, but then gave up a double as Ezekiel put the game-tying run in scoring position.

Renta, however, settled back into the circle and put the hit behind her. After falling behind in the count 2-0 to the next batter, a ball was lined to the outfield, but right at Sydnie Reese, who closed her glove on the ball for the final out to cement the state championship.

Evangel started the game in a quick 1-0 deficit after Ezekiel grabbed the advantage in the top of the first.

Ezekiel came back with an RBI single in the top of the third to tie the game, but from there, the Knights couldn’t find any more success at the plate.

Renta put them down in order in each of the next three innings and gave up just the one hit in the top of the seventh before finishing off the complete game.

She allowed two runs on six hits and struck out five in the championship win to earn the MVP award.

Reese and Meyers had the RBIs in the win as well as one hit each. Littleton and Susie Landis each had two hits, while Ponder, Rileigh Johnstone and Anna Donegan each had one hit in the game.

Evangel had the chance to win the title thanks to taking the opening game of the series 12-1 on Friday, April 23.

In that win, Evangel scored six runs in the second and six more in the third to put the game away in a shortened five innings. Baylee Knight led the Lightning with two hits and four RBIs in the win, while Presley Thornton added one hit and two RBIs.

Renta added two hits, while Ponder, Reese and Landis each had one hit and one RBI. Renta picked up the win in the circle as well thanks to striking out six and giving up one run on four hits with no walks.

They could have closed the series out that night, but lost the second game in a tight 5-4 battle.

But in the championship game, the Lightning bounced back to win the one-run game in the biggest game of the season.

Helena volleyball players to play together at next level