Help comes full circle in the wake of disaster 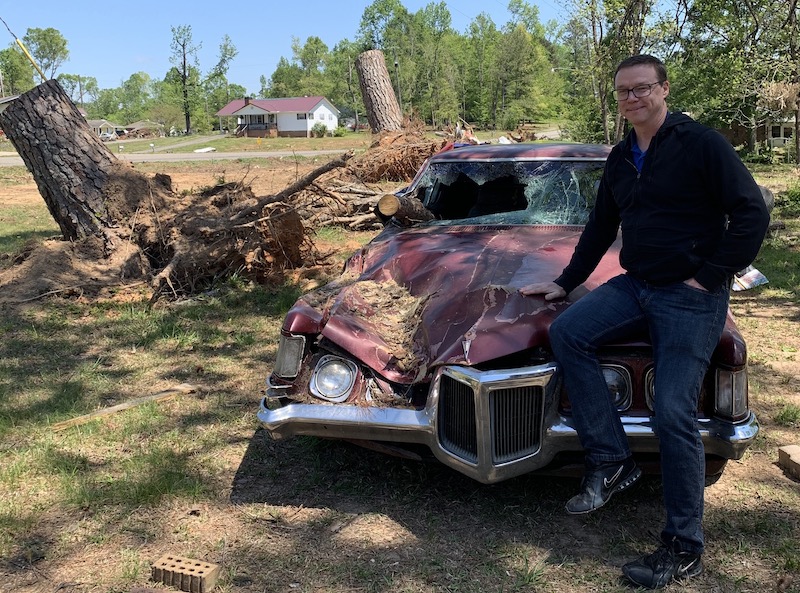 The day before an EF-3 tornado hit Ricky Harmon’s home, he'd made the decision to restore the Grand Prix his mother bought brand new in 1970. The log in the windshield went all the way through the car and into the ground. (Contributed)

On March 25, Ricky Harmon had been at home alone most of the day before an EF-3 tornado changed the entire landscape of his home and all the homes around him as far as the eye could see.

Just minutes before the tornado landed, two of his daughters arrived, as well as his wife with two missionaries their church had been hosting.

“It was so still and quiet in those few minutes before, and then I heard wind swirling. I’d never heard wind swirl before and I could tell it was really high up. I knew it was not a good sound,” Harmon said.

They made it to their safe place with a minute to spare, when they heard the wind pick up for no more than 15 seconds.  Thinking at that point it hadn’t been that bad, he came up only to realize that not only had trees come through the roof, they had lost all four cars and more trees than they could count.

His family emerged from their home shocked but safe, to a neighborhood already taking action.

“Within 15 minutes the road was cleared by neighbors so the city could get through,” he said. “Everyone who had damage was checking on neighbors, and everyone without damage was working to clear the way to help those that did.”

Harmon, a member of the Columbiana Ward of the Church of Jesus Christ of Latter-Day Saints, went on his first mission for the church as a young man not long out of high school. He’s been in consistent service to his community ever since. That service to others came full circle when in less than an hour, others were showing up to serve him.

The next day two dozen people showed up. The day after more came from other churches. And then even more the day after that. Many organizations brought food during those first days. Perfect strangers brought water, cleared debris and brought their chainsaws to cut the more than 30 trees that were lost on his property alone.

A month later, as the initial flow of help has slowed, the Harmons still find themselves relying on the help of others as they live with friends and receive help in other ways like the GoFundMe account set up by friends to help them replace their four paid off cars.

Harmon, humbled by the outpouring, said, “It’s a different skill set to learn to receive, and I’m learning that not accepting help is a selfish thing to do to those that want to help.”

Added Harmon, “The best way to survive disaster is to maintain a sense of gratitude. I’m so thankful my house did its job in keeping us safe, and I’m thankful for the friends who continue to help and check in on us.”

It will be months before the Harmons are able to live in their home again as they slug through the process of working with insurance companies and contractors. They ask that the community remembers months down the road their friends that were hit hard by this storm.

“Several months out, your friends will still be needing encouragement through meals and kind words. Don’t forget to reach out to them,” Harmon said.