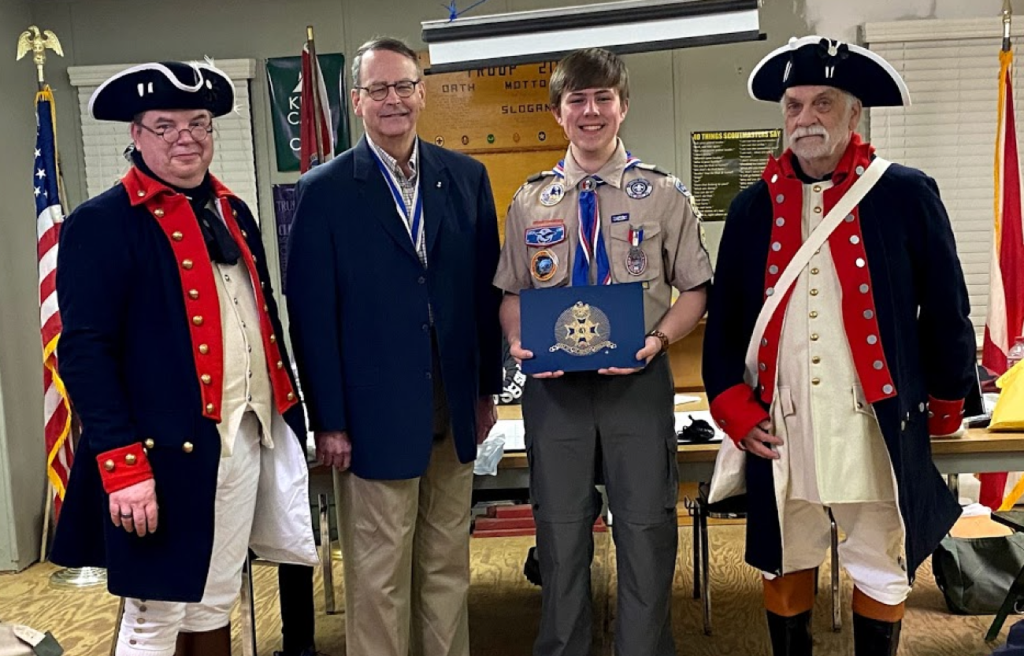 PELHAM – Each year, the Arthur M. and Berdena King Eagle Scout Scholarship Contest asks young people participating in the Boy Scouts of America to complete a generation chart and submit a patriotic essay for a chance to win scholarships to help pay for their college tuition.

This year the Pelham Cahaba Coosa Chapter of the organization sponsored Michael Karmondi who earned the honor of second place out of all entries in the contest. As scholarships are awarded for the top two finishers, Karmondi will receive money for his winning entry.

According to Bill Daniel, chapter secretary, Karmondi earned second place for his essay titled ‘The Declaration of Independence is No Simple Document,” which discussed his love and appreciation for the United States.

“Alex plans to major in Mechanical and Aerospace Engineering,” Daniel said. “So, he has decided to attend the University of Alabama in Huntsville.  He wants to work for NASA or some other company in a space-related field. He is currently a member of Scout Troop 216, Trussville, Alabama.”

The contest is available to Eagle Scouts nationally with the only restriction being that they have not reached their 19th birthday by the year of their application.

The winner of the contest was Catherine Simpson and third place went to Alex Cole who both were from out of the state.

The award was presented to Karmondi at the annual Alabama Society of the Sons of the American Revolution Convention, which was held on Feb. 13.

The SAR is a congressionally-chartered organization that was founded in 1889 in Louisville, Kentucky. They exist as a genealogical organizations where provable descendants of military members during the American Revolution can organize and participate in events together. They regularly host contests such as these to instill a sense of Americanism in young people, and reward them for their hard work.

More information about the Cahaba Chapter of the SAR can be found at Cahabacoosasar.org.