From rough to fairway: Carlisle uses golf to overcome trauma of tornado

Driving home from the beach after a spring break trip with her friends, Oak Mountain senior Bella Carlisle got a Facetime call from her sister at 1:25 p.m. on Thursday, March 25, giving her news she didn’t want to hear.

“We’re about to be hit,” her sister said with a tornado barreling straight for their house off Alabama 119 in North Shelby County.

Inside the house along with Carlisle’s sister were her dad and two brothers, while her mom was stuck downtown.

That’s when her sister hung up as the EF-3 tornado bared down on top of their house behind Our Lady of the Valley Catholic Church at 1:30 p.m.

“My heart dropped,” Carlisle said. “She said, ‘I have to go,’ and I was just like ‘Oh no.’ Right before they hung up, my dad said it looked like a tsunami was coming over the mountain, and that’s when they rushed inside to take cover.”

Then, after just minutes, Carlisle’s phone rang again. She picked it up and couldn’t believe her eyes.

“That’s when my sister called me back, around 1:45, just distraught,” Carlisle said. “She was showing me everything that happened and it was scary. To see my family dealing with that and me not being there with them was difficult. That’s all I wanted was to be around my family more than anything in that moment.”

At that point, she had turned around and was headed back to the beach to stay with her friends one more night with trees down everywhere around her house blocking her family’s home from the main road. 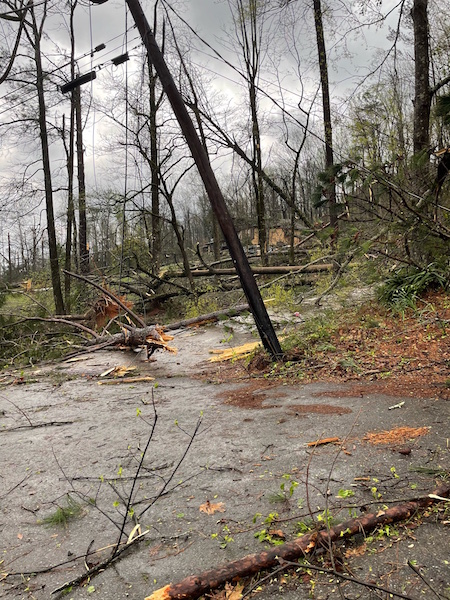 “I told her, due to the storms, to stay at the beach,” said her mom Natalie Carlisle. “Thank God she did that.”

About two hours away from home when she did turn around, Bella would have likely been coming through the area when the second tornado hit that afternoon through the center portion of the county from Calera through Columbiana.

But that next morning, she hopped out of bed and headed home at 5 a.m., anxious to get home and give everyone in her family a hug after surviving the traumatic event.

“When I pulled up, there were powerlines all in the street and in people’s backyards, electrical wires were dangling, trees were all over the road, in our backyard and in our houses still,” Bella said.

With roofs destroyed, a tree on Bella’s car and other damage in what looked like a war zone, the sight was one that still haunts her to this day.

“I miss my trees because I liked how pretty the nature was and how green it was, but now, it’s just dirt everywhere from them clearing out the trees after they were snapped in half and blown all over the place,” she said. “There is no green anymore, it’s just brown.”

It was a moment that hit her hard, especially having dealt with other struggles at times in life.

“Battling stuff on my own already, coming home and seeing what I saw was detrimental on my mental state,” Bella said. “Just seeing everyone and their houses really impacted me and showed how real this was.” 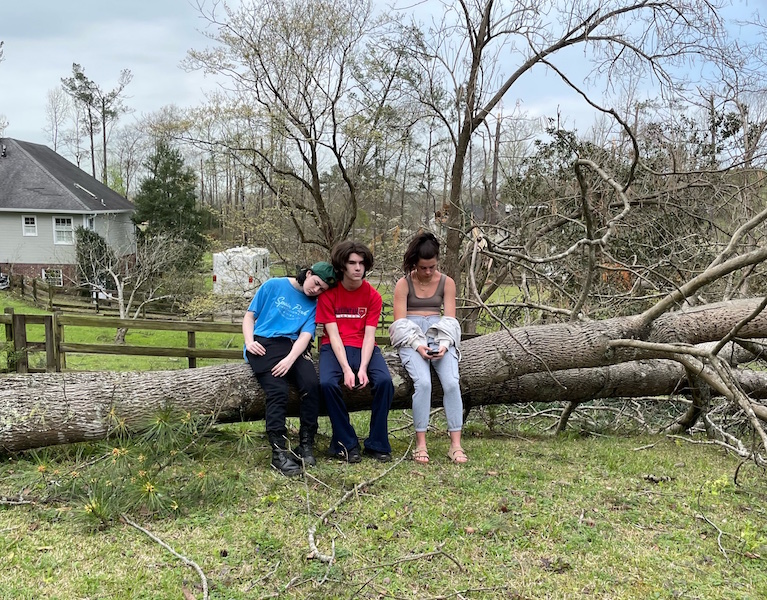 But out of the storm came a renewed sense of hope as well.

As a senior on the Oak Mountain golf team and as part of the Oak Mountain community, Bella and her family started to see the impact of those you didn’t even know cared about you coming out of nowhere to offer a helping hand.

“We had people down the road, right across from Heardmont Park, immediately come over to help clear debris, try and make sure everyone was safe, getting water for everyone, just doing whatever they could for us at the time,” Bella said. “It made me cry because I never realized how big of a community we had and how much we love and care for each other.”

With no food or water, the high school was also a major help, giving them gift cards and other items from their special drive to help get them through a difficult stretch.

“There is no telling how we would have been mentally if it weren’t for all of those people who showed how much they cared about someone in their community, even ones we never met,” Natalie said. “Seeing the impact of the community and how everybody has been so amazingly wonderful has been a true blessing. If you need something, they come in and help right away. It shows that you are important and someone always cares for you.” 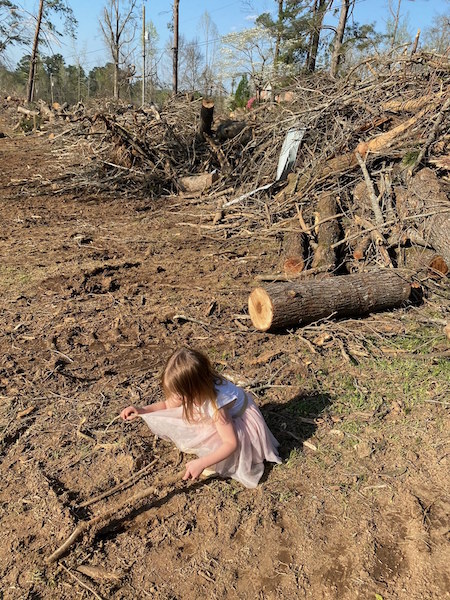 Then, there was the girls golf team, which Bella has been a member of since seventh grade.

With 10 girls on the team, they share a text thread and as soon as the storm came through, they picked up the phones and immediately started texting each other.

“It is the nicest, greatest bunch of girls ever put together,” head coach Susan Schwartz said. “They all start texting and accounting for each other, and that’s when everybody started wondering why they hadn’t heard from Bella.”

That’s when Eleanor Forbes, a teammate who lives just behind Bella and her family, said “I don’t know where she is, but it’s bad over here.”

“At that point, we all started trying to find out where Bella was,” Schwartz said. “There was no cell ability, there was no power, no nothing and they couldn’t get to her and they panicked.”

It took two days before Forbes could even see Bella’s house with all of the trees that were blocking the view, and that’s when she texted the group and said “We have to do something, we have to put our hands on Bella.”

“For high school girls to think like that, it’s truly special,” Schwartz said. “The golf team and the parents, their whole purpose became ‘How do we help the Carlisles? What do we do for Bella? How do we get them back to where they were?’”

That’s something Oak Mountain High School Principal Dr. Kristi Sayers is extremely proud of, saying she knew the community and school would step up in a time of need.

“I think the teachers and kids just embrace each other here,” Sayers said. “I’ve been here seven years, and we’ve had some bad things happen, but every time there’s a bad thing that has happened, the school comes together. I think that’s what makes me the most happy is that we look out for each other.”

After the cleanup process began and the family started trying to get back to as close to normal as possible, Natalie reached out to Schwartz saying they needed some help.

“I asked her what she needed, and she got straight to the point saying ‘We have to get Bella on the golf course, we have to get her out of this house and on the golf course with her people,’” Schwartz said. “She is the rock of the team. As the only senior, those girls look up to her. They put Bella on this pedestal because she looks after them and helps them every step of the way.”

She eventually grabbed her clubs out of the trunk of her car that was crushed by a tree during the storm rejoined the team on Monday, April 5, less than two weeks after the tornado took almost everything from the family.

Schwartz and Bella both described the senior golfer’s presence on that Monday at Highland Park Golf Course as zombielike. She said she knew she needed a distraction from everything going on, but her mind still was at home.

That led to her shooting one of her worst scores of the season with a round of 98.

“I truly believe she was dealing with post-traumatic stress,” Schwartz said. “I questioned whether or not she needed to or wanted to play in the golf tournament. It’s one of the biggest we play and she hadn’t picked up a golf club in two weeks.”

But by the end of the day Monday, she started to come out of the darkness and her bubbly self was starting to reappear.

The next day, she showed up and looked like her old self. She went on to shoot the low score of the day and was one of the most enjoyable people to be around on the course all day.

“She looked like Bella again,” Schwartz said. “Her dad looked at me after the tournament was over and said ‘This has changed her.’ Just being with her people, with her team, and going back to being Bella the leader of the team. It wasn’t the pressure I thought it would be, it was a comfort zone for her. It’s just a great example of what sports can do. It went a whole lot further than just picking up a golf club and playing a sport.”

After all of the trauma, it was a moment Bella didn’t know was going to impact her the way it did.

“It was the first time I felt at peace in two weeks,” she said. “Being somewhere that didn’t have trees down all over the place, didn’t have blue tarps on top of all the roofs. Just seeing the nature and what God has really made. Then, being around a bunch of girls who distracted me the entire time, it put me at ease.”

Carlisle is now set for her next step at Snead State where she’ll play collegiate golf, and she’ll do so with a new perspective on life after falling to a new low, but then coming out of it rejuvenated.

“It was almost like rock bottom,” Bella said, recalling the experience. “I was like ‘Wow, nothing good is going on right now.’ I was thinking all of these negative thoughts until I got home. God spared my family and showed me there are better days ahead. This was just a small battle for a better outcome. I still have my friends and family, and a great community that will always be there for me.”