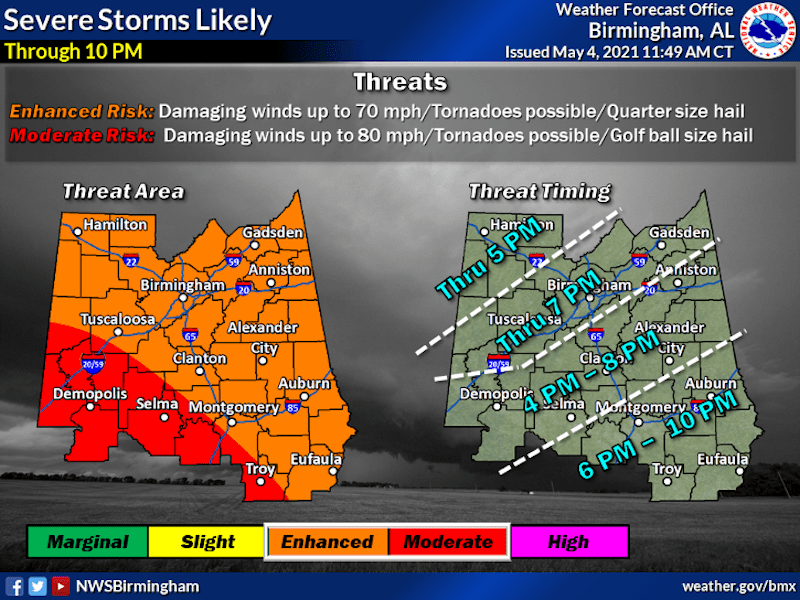 Shelby County Schools will dismiss at 1:30 p.m. today due to the threat of severe weather this afternoon. (Contributed/National Weather Service)

Shelby County Schools has announced that it will dismiss on Tuesday, May 4 at 1:30 p.m. due to the threat of severe weather later this afternoon.

All after school activities were already canceled and will remain canceled with the early dismissal.

The school system made the announcement due to the concern for several rounds of inclement weather and the increased possibility of damaging straight line winds.

According to the National Weather Service in Birmingham, there is an enhanced risk of severe weather for Shelby County with a moderate higher risk just to the west.

With the threat comes the possibility of tornadoes, damaging winds up to 70 miles per hour and quarter-sized hail.

The NWS says the greatest threat for severe weather will come from 2 p.m. until 10 p.m. with Shelby County’s timeframe for dangerous weather coming between 4 p.m. and 8 p.m.

They have also said severe storms are likely with the potential this afternoon for widespread wind damage.

Shelby County is also under a tornado watch until 4 p.m. this afternoon.