Thompson falls in opening round of postseason 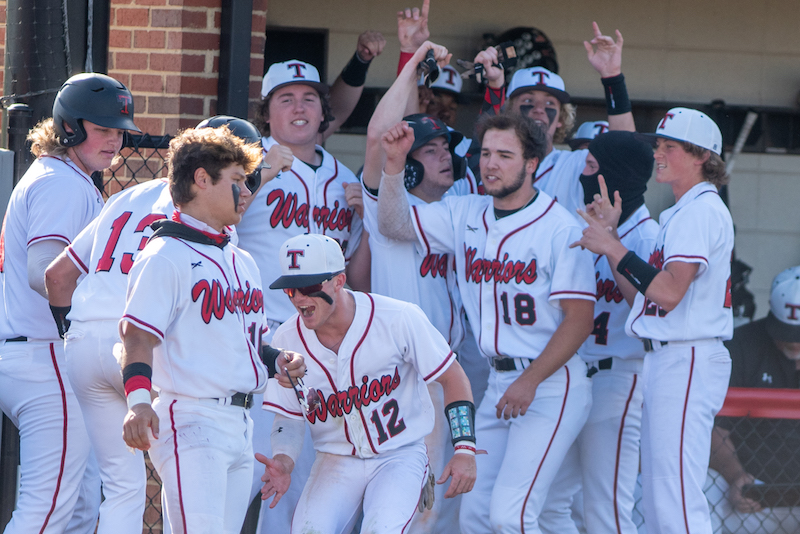 The Thompson Warriors fell to No. 3 Florence in the opening round of the playoffs to conclude a special season. (File)

FLORENCE – After a battle for the postseason that saw them beat Hoover in a must-win game during the final area series, the Thompson Warriors were forced to take on No. 3 Florence to open the 2021 postseason.

The Warriors put together a combined 12 hits and 10 runs between their two games on Friday night, April 30, but couldn’t avoid a sweep after giving up a combined 20 hits and 20 runs to end the season.

In the opener, Thompson fell behind 2-0 in the top of the first, but drew within one run in the top of the third. Following a lead-off triple from Connor Gregory, Brodie Holcomb hit a hard grounder toward shortstop that ended with an RBI single to get within one.

The inning, however, ended for the Warriors with three consecutive strikeouts.

Florence came right back with a run in the bottom half off an RBI double, but the real damage came an inning later.

That’s when the Falcons put together their best inning of the game with four runs to take a 7-1 lead. It was also part of a two-inning stretch that saw them score seven combined runs with three more in the fifth.

Thompson scored one in the fifth, but still trailed 10-2. They then fell behind 11-2 in the bottom of the sixth before scoring one last run in the top of the seventh to drop the opening game 11-3.

Holcomb had a strong start to the series, going 3-for-3 with an RBI, while Logan Braunschweig and Braxton Turnbow both had one hit and one RBI.

In the second game of the doubleheader, it looked like it was going to be another run away for the Falcons after they scored eight runs through four innings to take an 8-0 lead on the Warriors.

Thompson, however, responded in a big way with its season hanging in the balance.

The Warriors came out in the bottom of the fifth and started to convert hits into runs.

Following an error that allowed Gregory to reach base and a single from Holcomb, Braunschweig doubled to right field to drive home their first run.

Florence then recorded back-to-back outs, but the Warriors had a rally in them.

A hit batter loaded the bases before Trey Puckett singled to right field to bring home two more runs and make it 8-3. Following another single from Turnbow to load the bases once more, Gavin Chandler was hit by a pitch to bring home a fourth run of the inning and bring the Warriors within four going to the sixth.

The sixth came and went scoreless for both teams, before an exciting finish to the game.

Florence scored an insurance run in the top of the seventh to take some of the pressure off of their lead, but the Warriors pressed them in the bottom of the seventh.

Needing five runs to tie the game and keep playing, they started a strong push with a walk from Ben Pearman and a double from Puckett to put the first two batters aboard safely.

Following a strikeout, a dropped third strike not only allowed Chandler to reach base safely, but also brought home Pearman. Gregory then walked before a second out was recorded.

Down to their final out, the Warriors got one more run on an RBI grounder to shortstop from Bruanschweig and then scored on an error by the second baseman.

But that third run of the inning was their final of the game, as the Warriors ran out of innings to complete their comeback, falling 9-7 to end the season.

Braunschweig, Puckett and Chandler all ended the season on high notes with two RBIs in the win. Puckett totaled two hits, while Braunschweig had one. Holcomb, Cade Watts and Turnbow all had hits in the game as well.

On the mound, Puckett and Turnbow combined to total 12 strikeouts with Turnbow throwing four in 3 1/3 innings pitched and Puckett totaling eight the rest of the way.

Thompson will lose several key players going into the 2022 season, but the Warriors, who finished this season 17-19, will get back players like Pearman and Chandler as leaders.