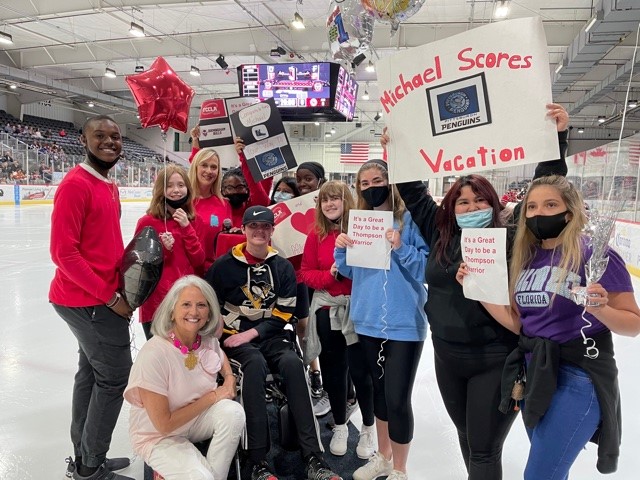 Michael Button was surprised with tickets and a trip to see the Pittsburgh Penguins as part of a magic moment on April 30. (Contributed)

Thompson High School senior Michael Button was surprised at a Birmingham Bulls game on Friday, April 30 when he was granted a ‘magic moment,’ in the form of a trip to see his favorite hockey team, the Pittsburgh Penguins.

The presentation came through the Magic Moments organization that seeks to provide happiness to children who are dealing with some kind of life-threatening illness or life-changing medical situation.

Button’s life was changed when he suffered a stroke on Thanksgiving Day, which significantly changed the way that he would experience life going forward. Button spent three months in the hospital and was diagnosed with a brain bleed, which ultimately led him to having to use a wheelchair and be dependent on a feeding tube.

Though no one ever expects to face a situation like this, Button’s mother Honnie Jo Hendrix said in that he and the family where in good spirits about everything. Back in March, Button’s classmates held a special homecoming event for him and Hendrix said at the time that he was smiling a lot and working through physical therapy on an outpatient basis.

At the game this was more evident than ever as Button was in good spirits with a huge smile as he took in the whole experience.

“It was supposed to be an incredible year filled with happiness,” Hendrix, said. “Unfortunately, his senior year has not gone as planned.”

Hendrix expressed that Button’s year would be made in some small part by this moment, and that she was excited to see him experience something nice in the midst of everything.

The event was organized in part by a former recipient of a magic moment, Britton Wade. She is a student at THS and wanted her friend to experience the joy of a magic moment like she did. Wade helped coordinate with the organization to make sure everything was perfect for Button’s surprise.

“Every time we are able to give a child a magic moment, it is so special; and this moment was especially heartwarming. Britton was surprised with a trip to Disney World for her magic moment years ago, and this weekend, she was able to pass along the joy she received in that moment to a fellow classmate who needed it.” said Courtney Carson, Central Alabama Regional Director of Magic Moments. “What an honor it is to be able to offer the gift of a magic moment to Michael.”