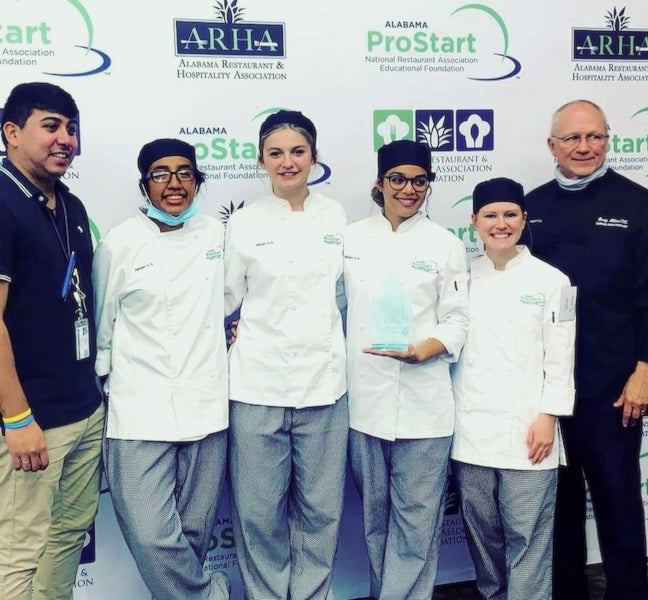 PELHAM – Four members of the Pelham High School culinary team took the top spot at the Alabama ProStart Student Invitational in the culinary category on May 3.

This competition tests students on their ability and skills as they relate to the culinary arts.

According to Chef Doug Allen, culinary arts instructor, this competition requires a significant amount of preparation and practice in the months and weeks leading up to it.

“You have to design your own menu and decide what you want to cook and how to make it fit within the requirements of the competition,” Allen explained. “We started going through the process of getting interested students around the beginning of the school year. We then got the team together to work on knife skills and other basics until we decide to set the menu, which we ended up doing in January. Our students practice twice a week in preparation for the competition.”

The competition typically sends its winners to a national competition, but that was unfortunately canceled this year due to the COVID-19 pandemic. So that means that the PHS team gets the distinction of maintaining first place regardless of what they would have placed nationally.

The culinary team was required to prepare an appetizer, entrée and dessert and create a menu that reflected the prices of each of their dishes.

“Aebleskivers are a street food that can be found in Europe and resemble a little round donut that is fried in a cast iron skillet,” Allen said. “We used Alabama peach filling to give it a more regional taste.”

Allen said that both he and Alex Arcero, another culinary instructor, were incredibly proud of the hard work that the team put in for this competition.

“They inspire us so much because of their dedication,” Allen said. “To hear these professional chefs come up to us and say what a good team we have makes me feel great, but more importantly shows what those students are able to do.”

Students on the competition team include Raehgan McIntyre, Avery Fuller, Lexi Mugovero and Nancy Solis. Other members of the team that did not cook in the competition include Joseph Salazar and Connie Seagers.

Allen said that this accomplishment would not have been possible without the support of Superintendent Dr. Scott Coefield, PCS Director of Curriculum and Instruction Shannon Bogert and PHS Principal Kim Kiel and the rest of the administration.

Parts of Shelby County see 7-plus inches of rain,…