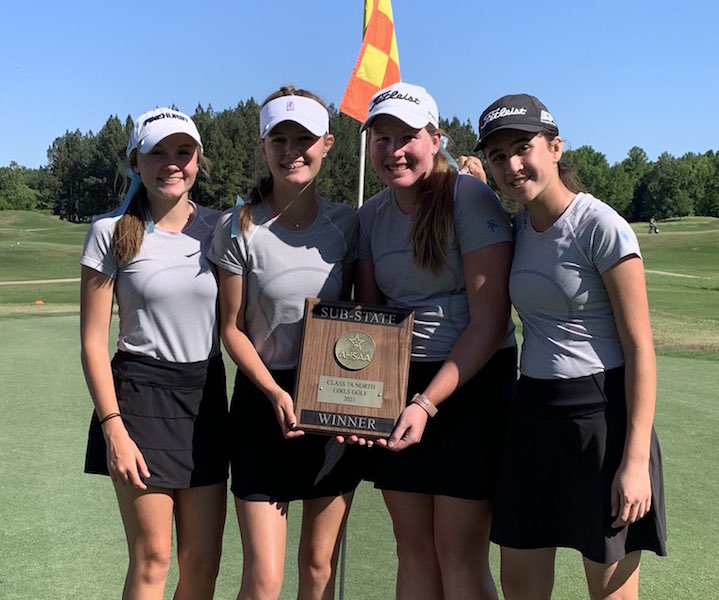 Spain Park’s girls golf team won the sub-state tournament on May 6 to earn a spot at the state tournament thanks to a team score of 235 and a low round of 74 from Taylor Trible. (Contributed)

Coming off a playoff win in the section championship, Spain Park was as confident as they have been all season due to the difficult nature of their section, which features a competitive Hewitt-Trussville team.

Impressively, the Jaguars shot a team aggregate score of 235 in the section championship at Highland Park in Birmingham with all four players shooting 85 or better.

Taylor Trible’s round of 74 in the section championship led the team and was a big reason they earned a chance at winning the section title. Courtney Johnson shot the next lowest round at 80, while Polly Kate McCrackin shot an 81 to complete the top three scorers for the team. Carmen Britt finished just behind with a round of 85.

The score of 235 tied for the lead with the Huskies, but it took just one hole for the Jags to claim the section championship in a playoff.

During the sub-state tournament at Hampton Cove, Spain Park shot that same team score of 235, continuing a consistent stretch, but this time, there was no one in the rearview threatening them.

Trible again led the team with a round of 74 at the difficult and lengthy course, which tied for the low round of the day, while McCrackin shot the second lowest score for the Jags with a round of 80.

This time it was Britt who stepped up for the third best score with a round of 81 to help Spain Park shoot the team score of 235. Johnson was just behind with her round of 87.

The next closest team was Huntsville with a team score of 251, as the Panthers also advanced to the state tournament as one of the top-two finishers. Hewitt-Trussville finished third in the tournament with a score of 258.

With back to back tournament wins, Spain Park gained confidence heading into the state tournament in Mobile May 10-11.

Joining the girls will be Chase Kyes from Spain Park’s boys team. The eighth grader shot a 74 at sub-state, which tied for the second qualifying spot and led to a playoff for the final spot at state.

Just to make the playoff, Kyes had to make a 10 foot birdie putt on the 18th hole that caught the right edge and fell in.

He then went on to win the opening playoff hole with a par to earn a spot at the state tournament as an individual qualifier.