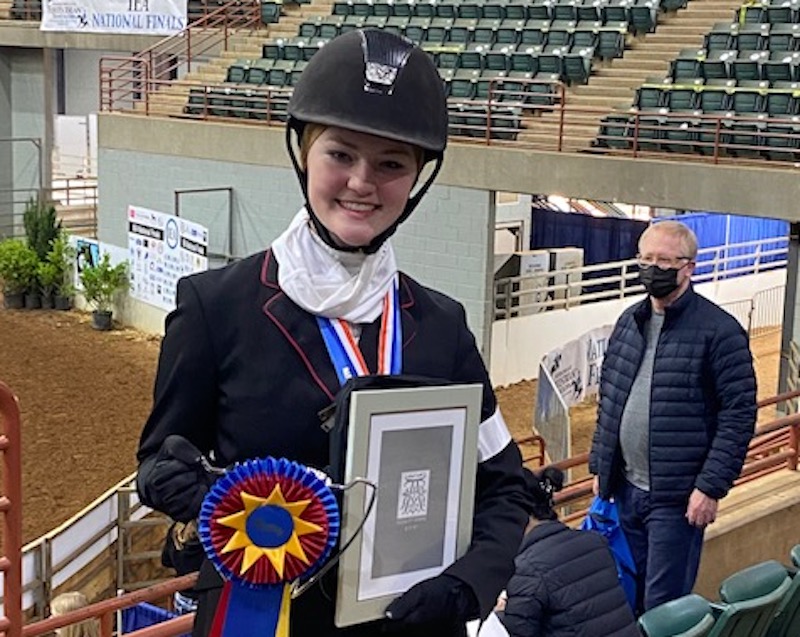 Last week, middle and high school equestrian teams from across the country gathered at the Georgia National Fairgrounds and Agricenter to compete in the IEA’s 19th Annual Hunt Seat National Finals. Chief among them was Spain, who received first place in the Junior Varsity Walk Trot category, beating out 16 riders from across the nation.

Over 400 riders from 11 regions were present at the tournament. Spain represented the zone encompassing the southeastern U.S., including Alabama, Tennessee, Georgia, Florida, Mississippi and South Carolina.

Spain competed as a part of the Magic City Equestrian Team out of Cameron Oaks Farm in Chelsea. Deana Hunter, the team’s coach, said the award is especially noteworthy since this marks Spain’s first year riding competitively. Spain, a newcomer to the team, joined last year, but Hunter said she has been thoroughly impressed with Spain’s riding ability thus far, as well as with her character.

“We’ve just had a great season. The general feeling has been just congratulatory, and we have such a fabulous team of girls that are super supportive and very close-knit, and have been pretty much overjoyed because [Spain] is just the sweetest kid,” Hunter said.

A total of 1,209 middle and high school teams nationwide pine for a spot at the Hunt Seat National Finals each year, but Hunter said just qualifying is an accomplishment, especially since the team was unable to compete last year due to the COVID-19 pandemic.

Spain and her team have persisted, however, and continued to practice and compete throughout last year, in anticipation for another shot at Nationals. Earlier this season, Spain qualified for Alabama’s statewide regionals in Gainesville after garnering enough points in five local competitions. She was then named the top qualifying rider for her zone after winning a semi-final competition in North Carolina.

“It’s been a long path as seasons usually start in the fall and go up through nationals in April, but last year’s nationals got canceled so my riders that qualified last year didn’t even get to go,” Hunter said. “It’s been just a crazy season for us as we have had COVID protocols and the girls have had to ride in masks, but they did a really good job this year.”

Spain’s dedication paid off as well as she received a trophy and a $250 gift certificate for her first-place win at nationals.

Hunter said that the team is now in its offseason and will resume practice in July, with recruitment beginning in June, and that Spain has expressed plans to remain on the team next year as well.

“She will definitely be on the team next year. I don’t think we can give her a choice now,” Hunter said.