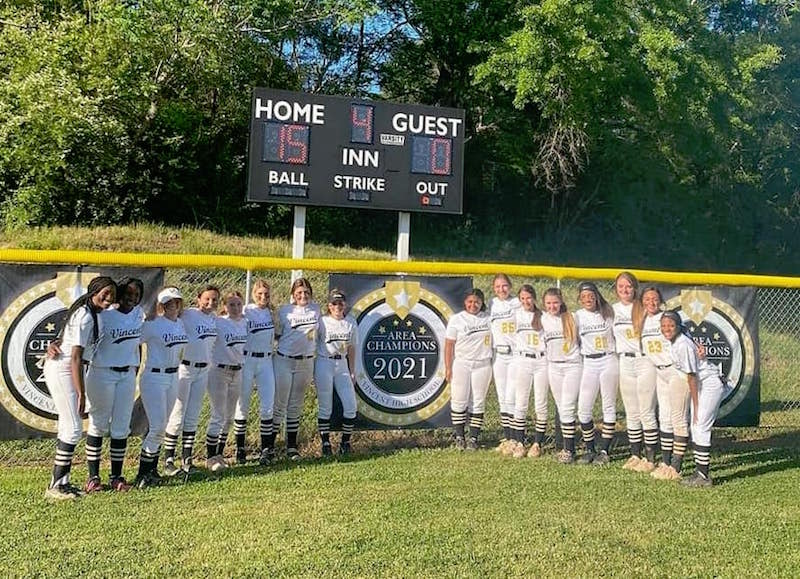 The Vincent softball team swept through the area tournament with ease to claim the championship and a spot at regionals on Friday, May 7. (Contributed)

VINCENT – The Vincent Yellow Jackets are playing their best softball at the right time and delivered a resounding victory in the Class 2A Area 7 championship game to cap off a dominant area tournament.

The Jackets took care of Fayetteville in short order, scoring 15 runs in four innings, including eight in the bottom of the fourth to put an exclamation mark on the 15-0 win.

The impressive win capped off a special run that saw Vincent score 36 runs in the tournament, while only allowing one.

Brantlee Chapman’s two-out single to left field put Vincent on the board in the second inning. The hit sent Katie Vazquez and Lela Beck across home plate for a 2-0 lead.

The Yellow Jackets stranded two in the inning, but more than made up for it, fast. Maddy Walker quickly laid down the Fayetteville offense again to get Vincent back in the batter’s box.

The Yellow Jackets capitalized by stringing together five singles and drawing two walks in the bottom of the third inning to add five more runs to their total.

Vazquez got a hit for the second inning in a row and drove in two runs this time. Chapman got involved again as well with another single. The duo did some solid base running from there, as Vasquez scored from third base on a passed ball.

That allowed Chapman to advance to third before coming home on Vincent’s final hit of the inning from Jaci Wallace.

Walker laid down the final three batters she faced in a row, including two strikeouts. She took the win in the circle for the Yellow Jackets, allowing one hit and a walk while striking out six.

She also reached base twice and drove in a run at the plate.

In the bottom of the fourth, Vincent loaded the bases with no outs thanks to a hit batter and two walks before another hit batter home the first run of the inning.

After a strikeout, two more walks put two more runs on the scoreboard for a 10-0 Vincent lead.

Wallace added another hit and an RBI next with a ground ball single to left and rounded the bases to score the game’s final run on a wild pitch.

She led Vincent with three hits and two RBIs with a run in the win. Five Vincent players had at least two hits, including Chapman and Vazquez.

The duo led the team with three RBIs each, while they also scored five runs combined.

Molly Reynolds and McKenzie Fields rounded out the win with two hits apiece.

Vincent will await their regional playoff matchup on Thursday, May 13.