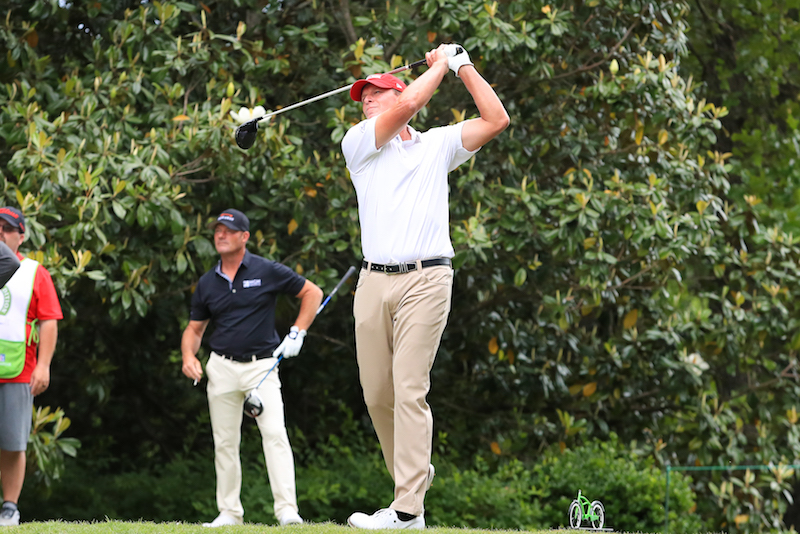 Steve Stricker leads by one shot going into the final round of the Regions Tradition today looking to defend his 2019 title at the season's first major. (For the Reporter/Dawn Harrison)

HOOVER – With a beautiful shot into the 18th green, Steve Stricker capitalized on the par-5 by making a 25-foot eagle putt to close his third round on Saturday, May 8, to take a one-shot lead into the final round of the Regions Tradition today.

“I had a number that I really had to hit a good hard utility club. I had to really turn it over,” Stricker said of his shot into the 18th green. “It just worked out really nicely. Had a nice look at it and made a good putt. I putted well today. I hit a lot of good shots. I hit some that I would like to have over. But overall, it’s a good solid day.”

Stricker won the tournament back in 2019 and was set to try and defend the major championship last year before the tournament was canceled due to COVID-19. But two years after his win, he hasn’t skipped a beat and now has a one-shot lead going into the final round looking to defend his title.

The eagle on 18 gave Stricker a bogey-free round of 7-under 65 and put him at 14-under for the tournament ahead of Alex Cejka, who shot a 6-under round of 66 to get to 13-under.

“This is why we’re here, to have the opportunity to win. And, you know, winning here a couple years ago has given me confidence that I can play well around here,” Stricker said. “We had a great day to play. And there’s a lot of good players up around the top. I’m going to have to go out, take care of business tomorrow, and put up another good round like I did today. And Alex played great. It was fun to watch him.”

Cejka was at 7-under for his round at one point after four consecutive birdies at one point on the back nine, but a bogey on the par-3 17th kept him from grabbing a share of the lead at the end of the day.

“I think everybody in our group played well,” Cejka said. “Steve made a lot of putts, especially down the stretch. The eagle was incredible. I mean, two great shots to the green and holed the putt. I three-putted the 17th hole and didn’t get up and down on 18. A little bit disappointing, but overall I played great. I had a lot of chances. I would like to play like this tomorrow, just give me a lot of chances, make a few putts and I’m super happy to be in that position going into the last day.”

The round of the day, however, went to Robert Karlsson, who shot an 8-under round of 64 to get himself in contention going into Sunday three shots off Stricker’s lead.

Dicky Pride is also tied with Karlsson at 11-under after shooting a 5-under round on Saturday to remain near the top of the leaderboard.

Jerry Kelly is in fifth by himself at 9-under, while defending champion Bernhard Langer is joined by Darren Clarke and David McKenzie at 8-under.

Woody Austin and Stephen Ames are both at 7-under, while Doug Barron is one shot back of that.

Fan favorite John Daly, who has had the largest following all week, is at 5-under and joined by other popular players Ernie Else and Retief Goosen.

Chelsea beats Gardendale in game 3 to advance to…