“After I retired, I figured I just couldn’t sit around. I’m just used to helping people,” said 87-year-old Virginia Barksdale.

Barksdale established the first storm shelter in Hoover, which operated for seven days after an ice storm resulted in traffic being diverted from Interstate 65. Motorists were left stranded and needed lodging until the Interstate was reopened. Barksdale made sleeping pallets and provided food and clothes for the wearied travelers. 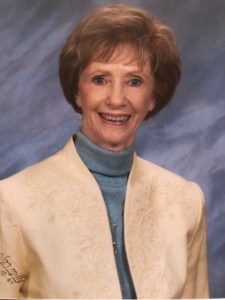 After retirement, she realized helping others was important to her so she visited Shelby Baptist Medical Center where she signed up to become a volunteer.

It was so rewarding to be a part of the volunteer work at the hospital,” Barksdale said.

In April of 2010, she began volunteering at the Physicians Center where patients would arrive to undergo procedures such as colonoscopies, endoscopies, etc. She greeted arriving patients, processed their check-in and answered general questions concerning their scheduled medical procedure. Barksdale would start her day at 5:30ba.m. She would arrive at the Center, start the coffee maker and begin sitting up the waiting area to receive patients and their families.

“I enjoyed being able to minister by being a smiling face, holding a conversation, serving a family member coffee, do what I could to ease their mind about the procedure and outcome,” she explained.

Barksdale made the five-day-a-week drive to the Physicians Center for eight years, ending her role as a volunteer in 2018.

“I miss being able to make a difference in someone else’s life, although I still do so in other capacities now,” she said.

For the past year, Barksdale has been a member of Lakeside Baptist Church. She is a member of Hoover Service Club (HSC). Organized in 1975, the organization is made up of various denominations of civic-minded women who give their time and talents to help meet needs in the community.

“I felt like it was a place that I could serve,” she said.

Volunteers donate canned items that are taken to the Green Valley Food Bank for monthly distribution. Approximately two dozen volunteers work the distribution effort as the public arrive at the food bank to pick up items.

Born in the small community of Coker, in Tuscaloosa County, Barksdale earned a Bachelor of Arts degree in business administration, graduating in 1953. She served as administrative assistant at Green Valley Baptist Church for 35 years. Married for 48 years, her spouse Jim passed in 2001. She has three sons, seven grandchildren and six great grandchildren.

Justice shines a light on history