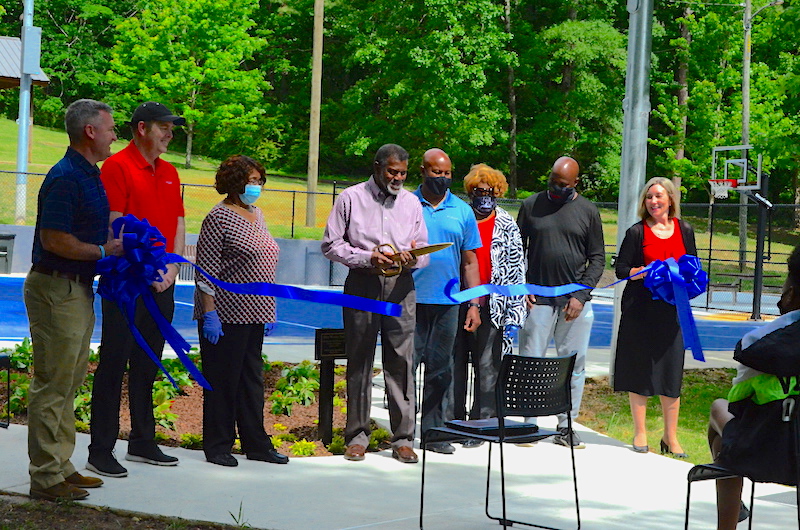 ALABASTER – The city of Alabaster held a ribbon cutting ceremony on May 8 to rededicate Abby Wooley Park after making a significant investment in improving the park.

Tucked off in a neighborhood on the outskirts of the city, the park was described as a hidden gem of the city. Now after improvements had been made to improve the park city leaders, community members and the family of the park’s namesake all gathered for a ribbon cutting ceremony to reopen the park.

“This neighborhood park is park of our administration’s goal to invest in wellness projects around the city,” Alabaster Mayor Scott Brakefield said. “Sophie Martin does a wonderful job here as the Ward 1 Councilperson. When we first started talking about park projects she helped form the idea. We kept coming back to this park and the history of the city that is in the community right here. Through her hard work we were able to push this project past the finish line.”

In 2020, funding was approved by the city council and received support from then Mayor Marty Handlon to take on renovations at the park.  Brakefield continued the effort after he became mayor, and supported renovations of the park’s fields, rails, basketball courts, walking trails and other things.

As the Ward 1 Councilperson, Sophie Martin said that this park project was very special to her and held great significance to the city.

“This is a great day for our city and Ward 1,” Martin said. “In a selfish way I don’t want anyone to know about this park, because it is such a beautiful gem in our city. The history that this park holds is so special. I have been blessed to learn so much about it and our community. This park was dedicated by Mrs. Abby Wooley back in 1972, almost 50 years ago. It is such an honor and a blessing to see all of the work that has been done. I want the children here to really enjoy it.”

Wooley’s contribution to the community and a city as a whole could not be overstated by guests at the ceremony. According to her grandson Joseph Lewis, Wooley cared deeply for others and was a pillar of the local community during her time.

“To God be the glory for my grandmother Mrs. Abby Wooley,” Lewis said. “For her generosity to our community. We needed a safe place for our children to play so people got together and said we needed a park, but we needed land. My grandmother had the land and dedicated it for the park. She was special in so many ways.”

A lot of factors came together to ensure that the park was able to receive the much-needed improvements. According to Brakefield, the city was assisted by the Community Foundation of Greater Birmingham that provided a $50,000 grant and assistance from the Columbiana Housing Authority that provided an easement to get additional parking.

The park is now open to the community and is located at 320 Park Road.