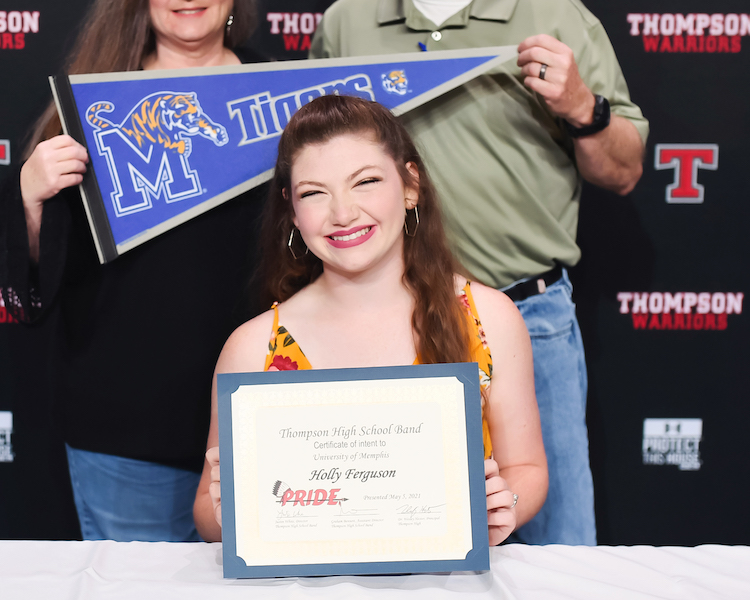 The Thompson High School band highlighted seniors that have committed to performing at a university at their Senior Signing Day. (Contributed/Stephanie Fisher)

ALABASTER – Students participating in the Thompson High School band program were featured at the school’s fourth annual Senior Signing Day program on May 5.

The school had 21 students who committed to participating in band programs at different colleges and university when they graduate. They hold this program each year as way to honor the hard work of their graduating seniors and wish them well as they move on to the next level.

“This is recognition for the students that are going on to the next level. They will represent Thompson, Alabaster and in some cases the state of Alabama at the next level. We have so many students moving on and it is a great tradition to celebrate them in this way,” Director of Bands Justin White said.

“These students are going on to perform at the next level, and we are very proud of them,” White said. “Sending them off is always the goal for us. We have set up our band room with banners that have their names on them and the school they are going to so everyone see as a way to recognize them. We are trying to create a lifelong passion for music, and our students are so gifted. All of them could play at the next level if they wanted to.”

The ceremony is usually a much larger affair with a lot parents, teachers and fellow students in attendance, however with ongoing pandemic it was a closed ceremony with limited attendance this year. White said that did not deter anyone and they were able to celebrate and recognize the students.