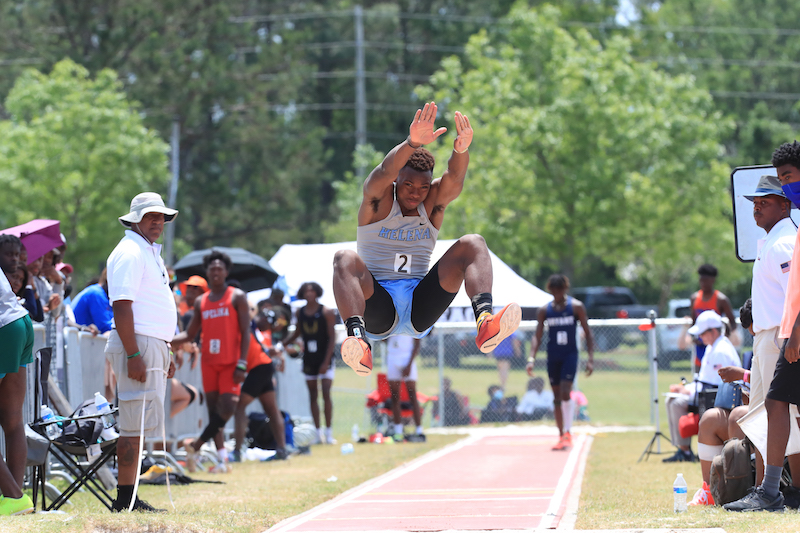 Helena’s Damian Hines won the 2021 AHSAA Decathlon State Championship on Tuesday, May 11. (For the Reporter/Dawn Harrison)

HOOVER – Competing against some of the state’s elite high school athletes, Damian Hines wasn’t intimidated heading into the AHSAA Decathlon State Championship May 10-11.

The senior at Helena High School finished inside the top two of five of the 11 events that make up a decathlon to win the state championship in dominant fashion with a point total of 6,178.

That beat out Auburn’s Tray Reynolds, who finished with 5,897 points in second place. 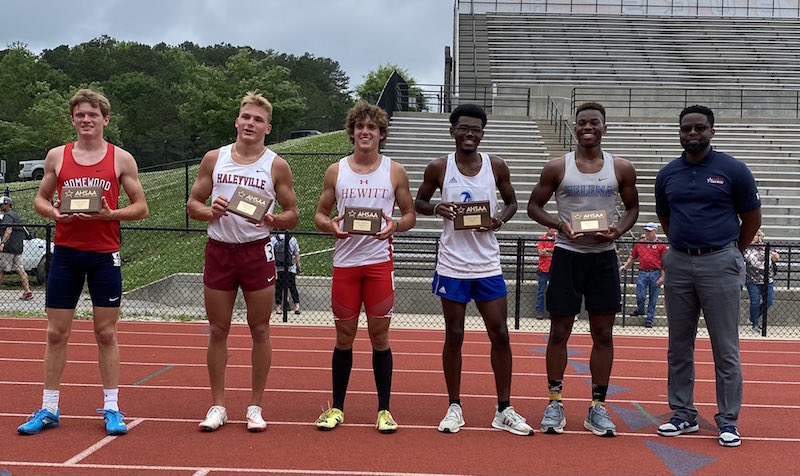 Hines finished first in the discus throw and shot put, while also finishing second in the javelin throw, long jump and 100-meter dash.

In the discus throw, he totaled 126 feet, 6 inches, to win by 18 feet over Homewood’s Cross Derriso.

His other win was much tighter, but he did just enough in the shot put to first place after totaling 40 feet, 4 inches, which beat out Falkville’s Mikell Elliott and Auburn’s Reynolds, who both finished less than a foot behind.

In the 100-meter dash, Hines was victim of a photo finish. He was right beside Javon Glenn of Oxford, but finished second with a time of 11.32 seconds, while Glenn finished 0.01 seconds ahead of him with a tie of 11.31 seconds.

His final top-two finish came in the javelin throw, where he finished second with a distance of 148 feet, 11 inches. He finished just behind Elliott, who totaled 151 feet, 3 inches.

He also finished ninth in the 110-meter hurdles, eighth in the high jump and sixth in the pole vault competition to add three more top-10 finishes. Beyond that, Hines finished 15th in the 400-meter dash and 17th in the 1,500-meter run.

Thompson’s Blake Ellis also competed in the event and finished sixth in the overall standings with a score of 5,292 points.

Ellis’ big highlight came in the pole vault competition, his signature event, where he finished third after clearing a height of 13 feet, 5.25 inches. He also finished fifth in the javelin throw with a distance of 136 feet, 1 inch and ninth in the 100-meter dash with a time of 11.68 seconds to claim three total top-10 finishes.

Teammate Gavin Horton competed as well and finished 31st with his highlight coming in pole vault as well, tying with Ellis.

Hammett’s highlight came in the high jump, where he finished first after becoming the only athlete to clear 6 feet with a height of 6 feet, 3.5 inches.

Margene added two top-10 finishes, claiming fifth in pole vaulting after clearing 13 feet, 5.25 inches along with Ellis and Horton and then finished sixth in the discus throw with a distance of 96 feet, 4 inches.

Helena also had a highlight in the state heptathlon meet thanks to Brooklyn Kirksey.

The junior performed well and finished 11th in the overall standings with 3,644 points.