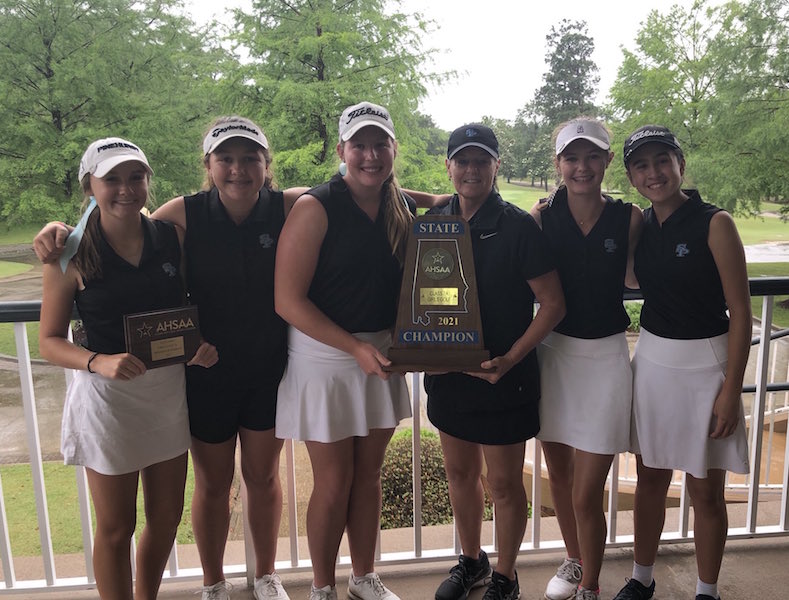 Spain Park’s girls golf team won the 2021 Class 7A State Championship after shooting a 7-over team score on Monday, May 10, before the rest of the tournament was canceled due to weather. (Contributed)

MOBILE – After a beautiful approach shot from the 18th fairway and coming off a birdie on 17, Courtney Johnson left herself with great look at a birdie-birdie finish at the AHSAA Class 7A State Golf tournament on Monday, May 10.

Unaware of the implications, she stepped up and drained the putt to close out a 2-under par round of 70.

What she and the team didn’t realize at the time was that those back-to-back birdies brought Spain Park from down one stroke to a state championship.

“We didn’t really know where we stood until we counted the other scores,” Spain Park head coach Kelly Holland said.

And, at that point, they didn’t think it mattered with the state championship expected to finish one day later. But the Jags knew after shooting their best team score of the year, they were right in the thick of things following Johnson’s birdie-birdie finish.

“They could hardly contain themselves. I told them, y’all be quiet over there and had to get them further away because they were so excited,” Holland said after Johnson’s birdie putt on 18. “Nobody really knew if we were ahead or behind, but they were just big smiles, cheering and hugging. I had to tell Courtney not to get caught up in the moment and go straight to sign her card. That was the best part for me, was just to see how excited they were and how much they cared about each other.”

After the scores were added up, Spain Park’s 7-over score didn’t just gie the Jags their best round of the year, but it was good enough for a one-stroke lead over Huntsville at the end of day one.

The teams then came back the next morning to start the final round and had just gotten under way when the horn blew due to thunderstorms approaching the Robert Trent Jones Golf Course at Magnolia Grove.

After several hours of delay, the AHSAA determined there was no chance for them to get the rest of the tournament in, which led to the Jaguars claiming the state championship behind their strong opening day.

“Those kids were excited,” Holland said. “There was a little bit of adversity with the weather, but they were so excited. That’s why you need to have a good first day. I think we thought the better weather would be on Tuesday. It didn’t even cross my mind that we wouldn’t finish until it started getting bad. We went out there planning to play our 18 holes and nobody even thought about a shorter day after we took the lead in round one.”

The win gave Spain Park its third state championship in school history after winning in 2009 and 2017, all under Holland as the head coach.

Huntsville finished one shot back at 8-over, while Auburn was three shots behind at 10-over.

“I got a text message from Huntsville coach saying congratulations and talking about how they shot best score they shot all year and what great competition it was,” Holland said. “We shot our best score of the year too and it was special to see. All of the girls and teams stepped up and played their best on the biggest stage.” 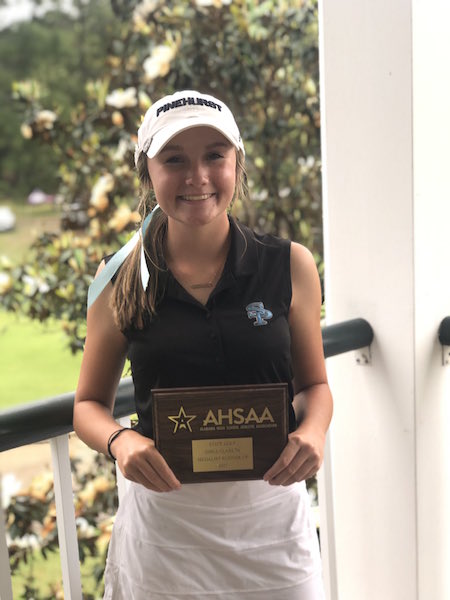 Johnson finished second in the individual race for a state championship with her 2-under round on Monday and was only one shot off the winning score set by Auburn’s Kate Ha.

But, after an even-par front nine, she responded with four birdies on the back nine to make up for a double bogey on 11. That strong finish of a 34 on the back side, including the back-to-back birdies, was crucial in the win with her as the final golfer on the course for the Jaguars.

Johnson also made about a 5-foot putt for par on 16 after a great up-and-down on the par five.

“On the front nine, she had a couple situations where she got in a bunker and hit over a green, chipped it back up and made her par,” Holland said. “She just kept grinding and making saves.”

It was a remarkable showing from Johnson, whose score didn’t even count at sub-state as the fourth best on the team.

Taylor Trible joined Johnson in the top 10 after shooting a 4-over round of 76 to finish in a tie for ninth, as Spain Park and Auburn were the only two teams to finish with two players inside the top 10.

Trible had three sixes on her card that kept her from a higher finish, double bogeying the par-four third and bogeying holes four and five, which were both par fives.

But Trible bounced back on her second nine. She made a birdie on 10 and a bogey on 17, but made pars on the other seven holes, all of which became crucial in the score at the end.

“Taylor Trible is our leader as a junior,” Holland said. “We’ve counted on her all year. She had expectations and delivered.”

One shot behind Trible was teammate Polly Kate McCrackin, who shot a 5-over 77. She had six bogeys, while she birdied the par-four ninth hole to finish in solo 11th.

She was also clutch on the back nine, shooting a 2-over 38 with just two bogeys and seven pars.

Carmen Britt finished just behind at 9-over par thanks to a round of 81, which put her in a tie for 14th in the individual standings and completed a balanced effort from the Jags.

“Our confidence was high coming into the tournament because of our balance,” Holland said. “We had potentially the most depth this year. We have four that trade places with low scores, so we knew we had a good group. They went in planning to do it. They had a good practice round and a good plan in place.”

“We talked a lot about adversity because we won our section tournament in a playoff. We had already qualified for sub-state, but just to go out and win a one-hole playoff, that was a big deal,” Holland said. “Then, we went out to play a practice round on what we thought was our sub-state course. We found out it changed that night and tried to play a practice round the next day, but the course was soaked and we had to play in sub-state two days later.”

Holland said she was extremely proud of this group because of that adversity, and she also knows what it means for the program moving forward.

“It’s tremendous. I was walking around the school with the trophy, and just asked if people wanted see it,” she said. “We won the first won in 2009 and it took us until 2017 to get the next one. But we’ve been there every year and had chances, so to win another one so much quicker this time was special. When people see Spain Park girls golf, they think that’s what we represent is state champions. We welcome that expectation.”

Now, with the entire team coming back next year, they already have their sights set on doing it again in 2022.

“All year, they were saying how young we were and that next year might be our year,” Holland said. “Well, we’re definitely ready for next year now.”