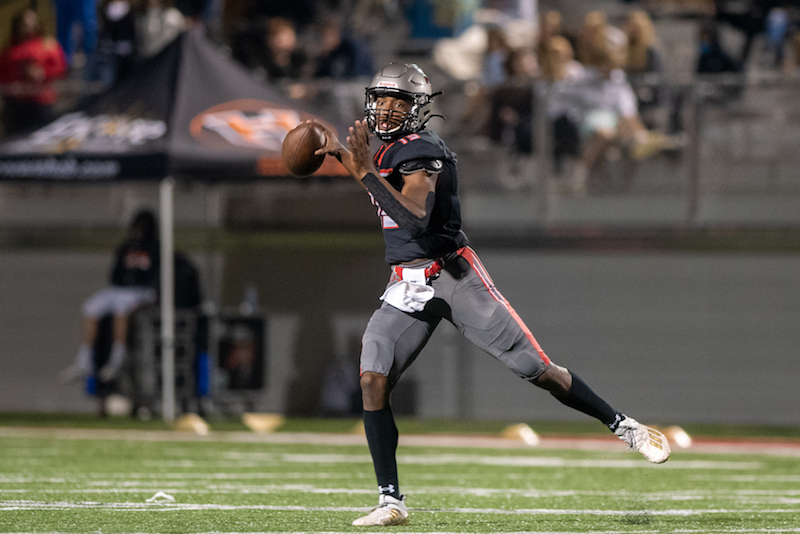 Conner Harrell has been named the Gatorade Player of the Year for football in the state of Alabama after a spectacular junior season that saw him throw for more than 3,500 yards and 40 touchdowns to lead Thompson to a second consecutive state championship. (Reporter photo/Keith McCoy)

After one year leading the Thompson Warriors, quarterback Conner Harrell has racked up several awards, but his latest may be the biggest so far.

On Thursday, May 13, Harrell was named as the Alabama Gatorade Player of the Year for football, which is given out to the top football player in each state every year.

The honor was given to Harrell following a remarkable first year starting for the Warriors that saw him lead the team to their second Class 7A State Championship in a row.

Harrell totaled more than 3,500 yards passing during the season and 42 touchdowns to get the Warriors to the state championship game where they finished off a perfect 14-0 season with a remarkable 29-28 comeback win. He also ran for 319 yards and five more touchdowns.

He missed the second half of that game, but took Thompson through one of the most difficult schedules in the state with four wins against the top three teams in the state.

Harrell also became the first Gatorade Alabama Football Player of the Year to be chosen from Thompson High School. The award, which recognizes not only outstanding athletic excellence, but also high standards of academic achievement and exemplary character demonstrated on and off the field, distinguishes Harrell as Alabama’s best high school football player.

He is now also a finalist for the prestigious Gatorade National Football Player of the Year award to be announced in May.

Harrell is considered a three-star recruit by both 247 Sports and Rivals and has college offers from close to 30 schools, including teams like Tennessee, Nebraska, Houston, UAB, Vanderbilt, Duke, Arizona State, West Virginia, Harvard and many more.

During his lone year as a starter, Harrell was named to the All-County First Team, All-State First Team, the Class 7A Back of the Year and to the Super All-State team alongside teammate Jeremiah Alexander.

In addition to his play on the field, Harrell has maintained a weighted 4.56 GPA in the classroom.

Through Gatorade’s cause marketing platform “Play it Forward,” Harrell has the opportunity to award a $1,000 grant to a local or national youth sports organization of their choosing. Harrell is also eligible to submit a 30-second video explaining why the organization they chose is deserving of one of twelve $10,000 spotlight grants, which will be announced throughout the year.

To date, Gatorade Player of the Year winners’ grants have totaled more than $2.7 million across 1,117 organizations.