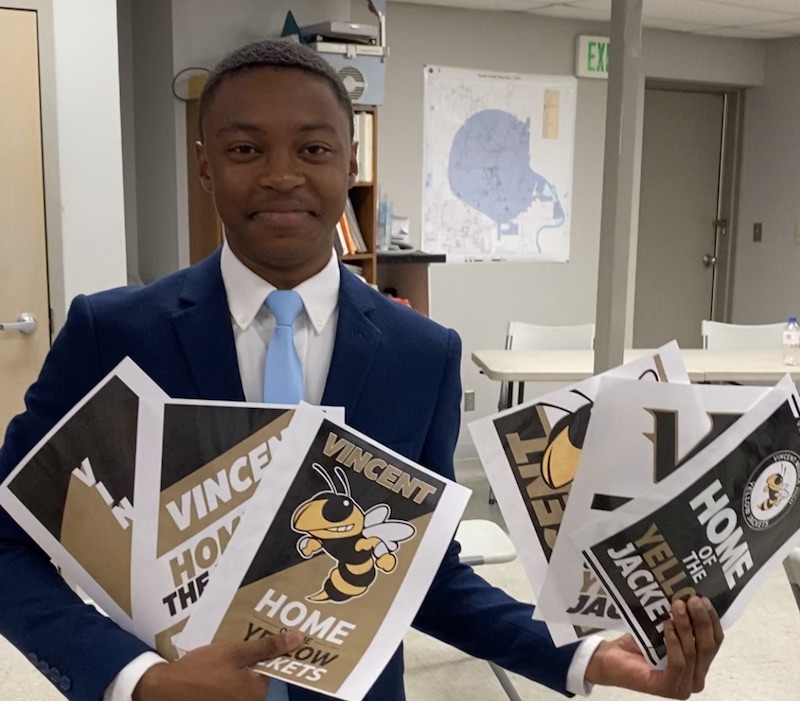 Olkaris Marandu, a senior at Vincent Middle-High School, addressed the Vincent City Council for the second time Tuesday, May 18, each time professionally dressed in a suit. As president of the school’s Student Government Association (SGA) he provided cost estimates and design options for school spirited banners proposed to be placed on city-owned streetlamps in downtown Vincent.

The unanimous approval is worthy of accommodation. However, it is the back story that is inspirational. During Marandu’s first appearance, April 20, he described the genesis of the project. He told how he had been thinking about how to leave a legacy, off and on, for four years.

“It wasn’t until last summer in the midst of a global pandemic and all the political and social unrest that this idea began to take root,” said Marandu. “I was determined to provide something positive for me, my classmates and our community,” speaking directly to members of the council.

Marandu explained the SGA project includes raising funds to purchase the banners. “We want to leave a legacy to show our school spirit, something that will unite the communities where VMHS students live.”

It is this student’s hope that the Vincent Legacy Project will become an annual event, inspiring and challenging Yellow Jackets who follow, to also consider doing something in other communities that have students attending VMHS. According to Ms. Lauren Yancey, the school’s principal, students have raised upwards of $1,700 toward the goal for the inaugural project.

Marandu is a well-mannered, soft spoken, young man whose heart shines when he speaks. In April, when he addressed the council and spoke about worldwide chaos and the desire to ignite unity, he moved members of the city council to tears.

Councilmember Corey Abrams said, “This is why I do this job. I am overwhelmed.” He then pledged a personal donation.

Each of the council members commended Marandu for his professional demeanor and bravery to stand up in front of a city council and make a presentation. “When school pride is enhanced and built, the community will follow. I applaud you,” said Councilmember Gary Anacker.

In April, Marandu’s heartfelt presentation touched the entire council and the audience. Councilmember Ralph Kimble walked directly over to the student and pledged a personal donation, audience members immediately handed a donation to Yancy and donations forms were distributed.

Marandu asked only for authorization to install the banners. He did not ask for funding.

According to Yancy, “This legacy project is Mr. Marandu’s faithful and genuine effort to unite his school.

“It celebrates that Vincent is home to the Yellow Jackets,” said Marandu.