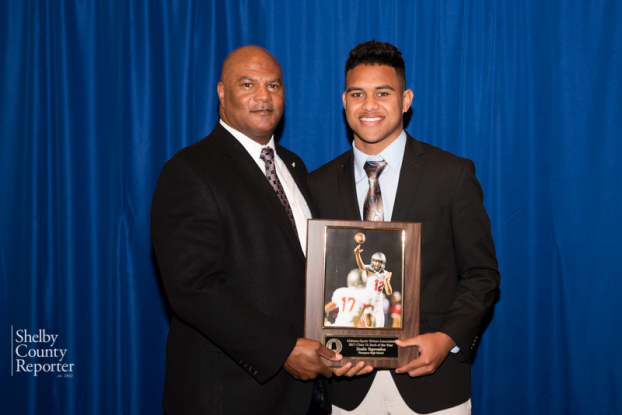 Alvin Briggs has been named as the next AHSAA Executive Director, succeeding Steve Savarese, who recently announced his retirement. (Reporter photo/Keith McCoy)

At a press conference on Monday, May 24, the AHSAA shared who would become the organization’s next executive director after Steve Savarese announced his retirement from the position on Wednesday, April 21.

Van Phillips, the current president of the AHSAA Central Board of Control, announced Associate Executive Director Alvin Briggs would be stepping into the role to fill the shoes of Savarese.

“We all agreed, he was the most qualified person for this very important job,” Phillips said.

Briggs, who played high school football at Greenville High School, went on to play collegiately at Auburn University before returning to the state as a coach and administrator.

He then became the Director of Athletic Directors and Coaches Association before being promoted to his previous role in 2018 and now his new role this year.

“Ten years ago, when I interviewed, (Savarese) asked where I wanted to be in 10 years,” Briggs said. “I pointed and said, ‘Right there in your seat.’ It was one of my dreams to be executive director of the Alabama High School Athletic Association.”

Savarese served in the position for 14 years before recently announcing his retirement, but he couldn’t have thought of a better replacement for his job.

“Alvin has the leadership ability to work with this staff and rely on this staff,” Savarese said. “I am confident under his leadership, with this staff, they will do an outstanding job. Alvin loves people, so as long as you care, and he definitely cares about our student athletes, you’ll have success.”

Briggs has looked at Savarese as a role model, mentor and father figure, and hopes that helps him handle the same role not just as well as his predecessor but better.

“My prayer is that I lead this organization to new heights as he’s done,” Briggs said. “My goal, and my plan and my prayer is to leave this association better than it was handed to me. That will be a daunting task, but I look forward to the challenge.”

Briggs said he has several big ideas, but he knows he has to rely on the help of his staff, something Savarese thinks he will excel at handling.

“Alvin will be just like I was when I started this job, which is a sponge,” Savarese said. “When I came in, I had all of these grandiose ideas. When I faced those challenges, I realized just how much I didn’t know.”

Briggs said he wants to make sure he gives his staff everything they need to be productive in moving the organization forward, but his main goal will be to help the AHSAA serve the member schools to the best of his ability and give student athletes their best chance to compete at the highest level.