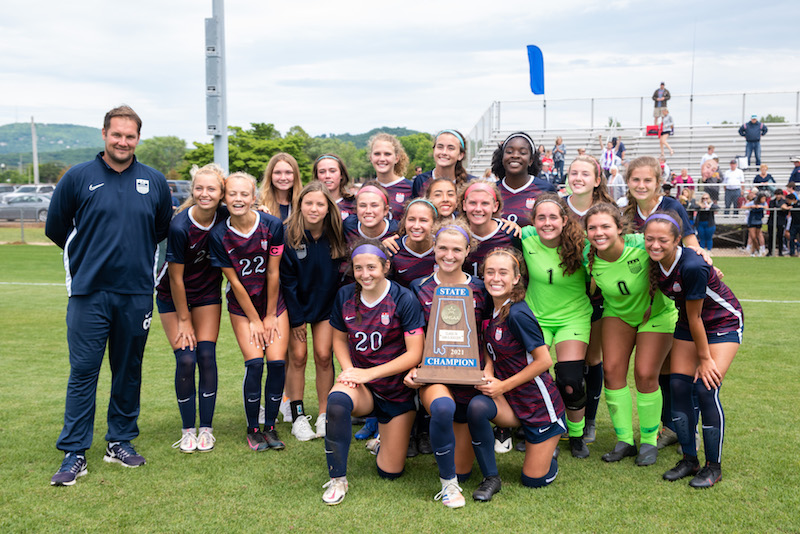 Oak Mountain’s Chris Blight was named Shelby County’s Coach of the Year for his work as head coach of the girls soccer program. (Contributed)

NORTH SHELBY – When he took over the Oak Mountain girls soccer program in 2015, head coach Chris Blight had big shoes to fill.

He took over a team that was coming off back-to-back state championships and had won the title three in four years, including a Max Preps National Championship in 2014.

Blight quickly put together powerhouse teams with the Eagles, but one team always stood in the way as their kryptonite—Vestavia Hills.

Last season, however, looked to be the year. The Eagles were ranked No. 1 nationally with a record of 13-0-1 and had beaten Vestavia 4-0 on March 12 when the season was canceled the next day due to COVID-19.

“It quickly turned from us being on top of the world and confident to sadness,” Blight said after the heartbreaking end to the season. “All the dreams and aspirations we had, we were achieving, but we didn’t get to see it through.”

The Eagles returned this year ready to make up for that misfortunate ending to the 2020 season, but after a 1-0 loss to the Rebels in the regular season, it seemed as if Oak Mountain’s rival might have the upper hand again this year.

But after edging past Spain Park 3-2 in the opening round of the playoffs and Sparkman 6-0 in the second round, the Eagles earned a spot against Vestavia in the Final Four.

This time around, Kierson McDonald broke open a scoreless game with a goal at the 23:25 mark to give Oak Mountain its first postseason win against Vestavia since 2015 and the first of Blight’s career.

That put Oak Mountain in the state championship game against Enterprise, which the Eagles went on to dominate 5-0 behind a hat trick from McDonald and two goals from senior Kaitlin Maynard.

Blight again had another remarkable season, finishing at 22-3-1, but by taking down the team’s biggest rival in the postseason and winning his first state championship leading the Eagles, he earned the right to be named this year’s Shelby County Coach of the Year for girls soccer as well.

“It’s an amazing feeling really,” Blight said after the championship win. “Obviously they’ve worked so incredibly hard. Ever since last season ended early for us, we were very motivated. We had something to still accomplish, and this isn’t just for this group, it’s for the seniors last year. I couldn’t be more proud of them.”

Blight has now amassed 109 wins in his six seasons leading Oak Mountain and now has a state championship to his name as he continues to build his legacy and help the Eagles’ program grow.

One of Oak Mountain’s main themes coming into this season was rewriting the ending of last year, but now Blight has rewritten his legacy as a coach, while the Eagles are back to being on top as one of the biggest threats in the state.

“We carried the saying of rewriting the ending with us everywhere, and we just had to believe in what we were doing throughout every practice and game,” Blight said. “We faced a bit of adversity throughout the year and overcame that. It’s all credit to these girls. They’re incredible.”

Blight also thanked his family for their sacrifices to help him and the Eagles achieve such a historic season.

“It’s an emotional moment,” Blight said trying to hold back tears. “You know, it takes a lot to be a coach’s wife and spending a lot of time away from them. They’re a big part of this too, so I’m very grateful for them.”

With some of the top players back next year, Blight hopes this season was just the first of many state championships to come.