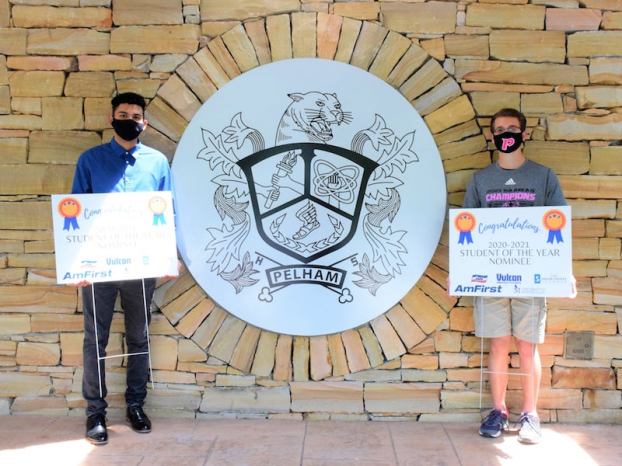 Yahir Aguirre and Shaun O’Neil were selected as the “Career Pathway Student,” and “Academic Student“ as part of the Shelby County Chamber’s student of the year awards. (Contributed)

Pelham students and teachers of the year recognized

PELHAM – The Shelby County Chamber recently highlighted excellence in education at their Student and Educator of the Year Award, which give recognition to those who show outstanding performance in academics.

These teachers were nominated in three categories—elementary, middle and high school—by Pelham City Schools administration. They were then chosen based on categories such as their philosophy of teaching, community involvement, and recommendations from colleagues and the administration at their respective schools.

According to PHS College and Career Counselor Michelle LeSueur, the school was asked to submit students in the categories “Academic Standout Student,” and “Career Pathway Student.”

“They were nominated by their teachers and by the school,” LeSueur said. “The teachers had to submit an application and gathered data about the students to submit. The teachers wrote essays discussing the reasons why they nominated the students, which ultimately led to these two being chosen.”

Aguirre was named the “Career Pathway Student,” and O’Neil was selected as the “Academic Student” for PHS.

“In my experiences with Yahir, he has been very organized and detail oriented with is approach to learning, which will benefit him in seeking a biomedical degree and in his professional career,” McDonald wrote. “He takes his education very seriously as he has maintained a 4.21 GPA while also being involved in many clubs and extracurricular activities. I believe Yahir is going to be a great asset to whatever field he decides to enter into, and have no reservation of recommending him.”

O’Neil was recommended by PHS teacher Rebecca Burnett for his hard work and dedication to his studies.

“Of the many students I have been privileged to teach, Shaun O’Neil is truly the most remarkable,” Burnett wrote. “Shaun is the epitome of excellence in all areas of his life, but it is his academic prowess-that truly seems an innate wisdom, his conscientious attitude and his humble servant leadership that I find highly valuable and rare. Shaun’s stellar 4.4 GPA, number one in class rank and excellent standardized test scores reveal his academic aptitude and work ethic.”

As part of the awards, the students received a $1,500 scholarship toward the college of their choice.

By WILLIAM MARLOW / Special to the Reporter NORTH SHELBY – The Westminster School at Oak Mountain celebrated its Class... read more