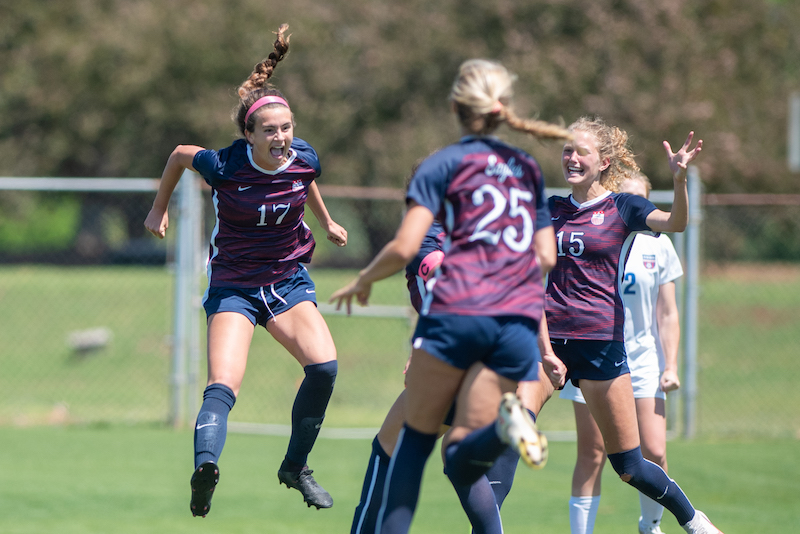 Kierson McDonald, above, scored four goals in the Final Four this season, including a hat trick in the state championship to lead Oak Mountain to the title and earn a spot on the All-County first team. (Reporter photo/Keith McCoy)

With seven girls soccer teams from Shelby County making the postseason, six making the second round, five making the quarterfinals and one going on to win a state championship, the 2021 season was one to remember locally.

It was a welcome sight after several were poised for impressive runs a season ago before COVID-19 forced the season to be canceled.

This year, those teams and the athletes competing with a renewed since of urgency to make up for last year, and it showed in the play on the field with several putting together historic marks.

In addition to those storylines, Spain Park, Indian Springs and Westminster all made the postseason as well, while Thompson and Briarwood continued to show improvements.

A lot of that was due to the talent on the field, with the Shelby County area fielding some of the best soccer players in the state, and the best of the best are honored on this year’s All-County team.

Forward: Haley Duca, senior, Chelsea. This year’s Player of the Year in the county, Duca finished second in Shelby County with 38 goals and became the first in school history to 100 career goals. She also added 19 assists this season and 52 for her career.

Forward: Norah Roller, sophomore, Indian Springs. This year’s leader in goals for the county, Roller posted a jaw-dropping 55 goals thanks to 10 hat tricks and scored eight goals in three separate games. She also totaled 12 assists and will be one of the state’s best returning players next year.

Forward: Riley Kate Hulsey, junior, Helena. Husley was Helena’s leader in goals this season with 22, while she also finished second on the team with six assists.

Midfield: Korin Ingram, senior, Pelham. A leader for the last three years at Pelham, Ingram scored 18 goals to finish second on the team during her final season and led the team with 15 assists as the team’s leader.

Midfield: Haley Wells, junior, Oak Mountain. The top midfielder for the Eagles this season, Wells led the team with 20 goals and added 10 assists as a captain for the Class 7A State Champions.

Midfield: Avery Burleson, junior, Chelsea. The second best goal scorer for the Hornets this season, Burleson was a versatile player in the midfield who scored 13 goals and posted 12 assists.

Midfield: Tatum Ahlemeyer, freshman, Spain Park. Spain Park’s leading scoring threat this year as a midfielder, Ahelmeyer was big against some of the state’s most difficult opponents to help the Jags earn a spot in the postseason.

Defender: Kierson McDonald, sophomore, Oak Mountain. One of the state’s best players this year, she wasn’t just a top defender but scored 14 goals and had 19 assists. In the Final Four, she totaled four goals, including the only one in a win against Vestavia Hills in the semifinals and a hat trick in the state championship game. She’ll be considered by many to be the county’s top returning player in 2022.

Defender: Kaitlin Maynard, senior, Oak Mountain. Maynard gave Oak Mountain one of the best defensive duos in the state alongside McDonald. During her senior season, she helped put together 16 clean sheets and scored two goals in the state championship game. She’s now headed to Ole Miss to continue playing in the SEC.

Defender: Morgan Snyder, junior, Thompson. Snyder has improved every year at Thompson and is a big reason the Warriors are doing the same. She put together 11 goals and 16 assists this season.

Goalkeeper: Mackenzie Titus, senior, Chelsea. Titus went straight from a physical run to the Final Four in basketball to the soccer field where she was one of the top goalkeepers in the state, leading the Hornets to the quarterfinals of the playoffs. She played in the final 15 games and made 71 saves, giving up just 12 goals and posting six shutouts against one of the most difficult schedules in the state.

Forward: Anna Martin, senior, Briarwood. Martin’s 16 goals and 12 assists led a rejuvenated Briarwood team this season that finished No. 6 in the state and just missed out on a playoff spot. She is now headed to Samford University.

Forward: Taylor Davis, senior, Helena. Despite missing more than half of Helena’s games this season, Davis totaled 15 goals and two assists for the Huskies. She was on pace to be one of the top goal scorers in the county and finished her career with 108 goals and 35 assists.

Forward: Georgia Cousins, sophomore, Thompson. Still a young player for the Warriors, Cousins finished her sophomore season with 11 goals and 16 assists, tying for the team lead in each category.

Forward: Natalie Doerfler, sophomore, Calera. Just a sophomore, Doefler went up against some of the state’s best talent and scored nine goals with 12 assists this season for the Eagles.

Midfield: Lane Hope, junior, Oak Mountain. A key in the midfield, Hope finished second on the team in assists with 15 this season and added 10 goals to play a major role in the state championship.

Midfield: Laura Cavan Smith, sophomore, Westminster at Oak Mountain. Despite missing several games due to an injury, Smith led Westminster with 17 assists and finished third on the

Midfield: Bailee Washington, junior, Helena. Washington finished tied for second on the team in goals with 10 and led the Huskies with 10 assists. She also added 12 steals as the holding midfielder.

Midfield: Sydney Soehn, junior, Spain Park. A member of the All-Metro first team, Soehn impressed opposing coaches this season for her effort in the midfield.

Defender: Nadia Ghabayen, senior, Helena. The top defender for Helena this season and the team’s MVP, Ghabayen had 31 steels on the back end for the Huskies.

Defender: Berkley Barnett, senior, Briarwood. Barnett was the leader of a Lions’ defense that gave up two goals or less in their final 11 games despite one of the most difficult schedules in the state. She also scored four goals and had seven assists.

Defender: Alyssa Wynn, junior, Pelham. In her first year starting on varsity, Wynn started every game and was the best defender on a Pelham team that posted 15 shutouts this season and gave up no more than two goals in any game.

Goalkeeper: Vivian Gray, senior, Spain Park. A multi-year starter at Spain Park, Gray was named to the All-Metro second team this year and posted eight shutouts against a schedule that featured just three teams with losing records. She gave up two goals or less in 14 of 17 games.