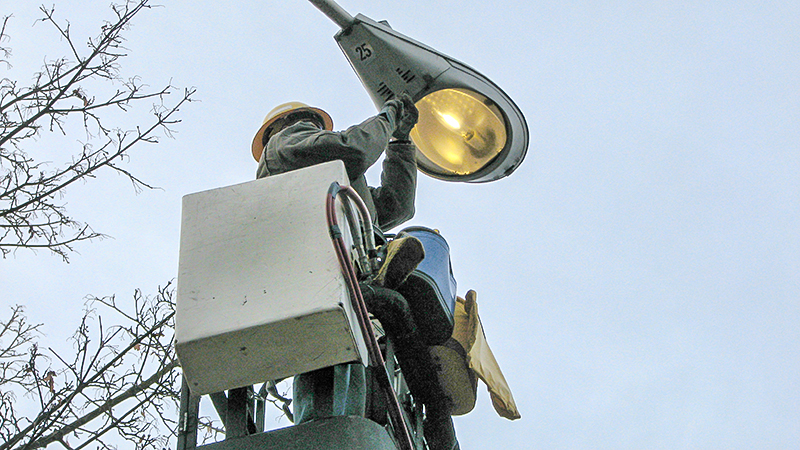 The city of Helena will enter into a contract with Alabama Power to install LED lighting on all of the city's fixtures. (File)

HELENA – In an effort to improve visibility and aesthetics, the Helena City Council voted to convert every public light fixture in the city to LED lighting.

Helena Mayor Brian Puckett said that he engaged with Alabama Power to do an analysis and study the city’s existing lighting throughout the city to determine the feasibility and cost of installing LED lights.

“We were initially looking at replacing the lights at the Helena Amphitheater,” Puckett said. “Because they are owned by Alabama Power we needed to engage with them. Looking at those lights spun off the conversation about how there is a great opportunity to improve the city and not spend excess cash.”

The city council approved the resolution on May 24 which authorizes Puckett to sign a contract with Alabama Power to replace all 1,100 light fixtures in the city.

“The analysis that Alabama Power did showed that this improvement would only cost us an extra $129 a month overall,” Puckett explained. “That is converting every single light fixture that we have. We are not retrofitting the existing fixtures, they will actually come out and put brand new ones on every pole.”

Some of the benefits from the project will include enhanced aesthetics and improved safety.

“First, it will be aesthetically pleasing. The lights will all be the same color which will make for a nice drive through the city,” Puckett explained. “Most importantly, these bulbs will be a lot brighter and safer for our community. It will make a huge impact for our citizens.”

After approving the resolution, Puckett signed and sent a contract over to Alabama Power who will begin preparations for the installments.

“Getting all of the equipment ready will probably take around 10-12 weeks, and then we will be looking at a three month install period,” Puckett said. “They will have to rewire, inspect and change all of the fixtures. With our 1,100 poles in the city, we are comfortable in saying the project will be completed by the end of the year.”

Even though changing lighting may seem like a small improvement, Puckett said it will have a huge impact on the city for many years in the future.