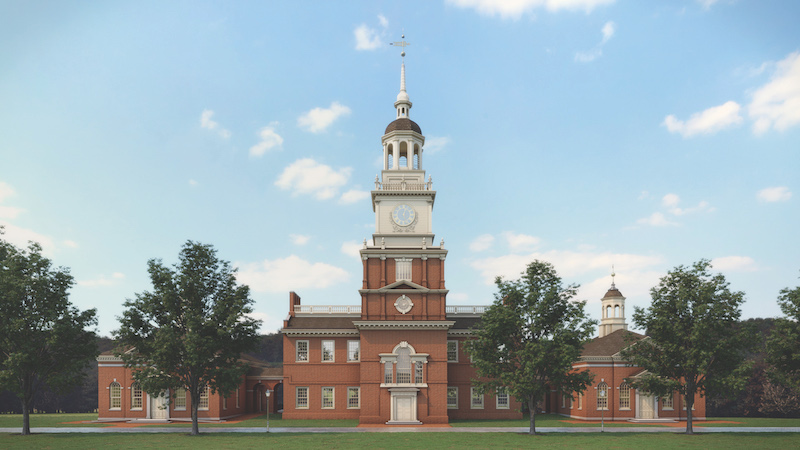 American Village in Montevallo was first chartered in 1995. Construction of a replica of Independence Hall is underway. (Contributed)

Tom Walker, founder and president of American Village, chartered in 1995, conceived the idea of the American Village in the late 1980s to be an American history and civics educational campus to inspire and prepare young people for their roles as good citizens and leaders.

Designed to be a classroom, a stage, a theatre and museum of ideas, the 188-acre campus in Montevallo has served over three-quarters of a million students from throughout the Southeastern United States since its opening on Nov. 30, 1999.  It draws thousands of public visitors each year.

The American Village Classroom educational vision is to build good citizens on the cornerstone of liberty. Talented staff present to school groups, educating and inspiring young people to explore the remarkable foundations of our country, and to consider the obligations of being good citizens. American Village school programs include student activities Oval Office, National Veterans Shrine, and the Randall Museum Scavenger Hunt. There are downloadable teacher resources student activities such as the Christmas coloring book and the Declaration of Independence word search.

The National Veterans Shrine is patterned after Philadelphia’s Carpenters Hall. The Shrine honors our veterans’ service and sacrifice for America and its freedom. It features major sculpture and paintings by nationally-renowned artists. Interactive media, artifacts and exhibits will help answer the questions: “Who are our country’s veterans?” “What did they do for our country?” and “What do we owe them?”

Housed within the Shrine is the Veterans Register of Honor, a website and database containing photographs, biographical sketches, and stories of America’s veterans and active members of the United States Armed Forces. General public and group tours are available. In addition to these activities and events, American Village offers venue service. There are several unique locations for receptions, rehearsal dinners, showers or teas, conferences, meetings and other private events within the American Village’s 183-acre site.

Construction is now well underway on the first-phase of what will be a full-sized replica of Independence Hall—containing interactive galleries, exhibits and a fully immersive theatre, as well as a one-of-a-kind assembly room where the visitor becomes part of the drama of America’s founding.

As American Village looks ahead to America’s 250th birthday in 2026, it resolves to raise Independence Hall as a means to reach even more young people, and to teach and inspire them for what one former United States President called “the highest office in the land: that of citizen.”