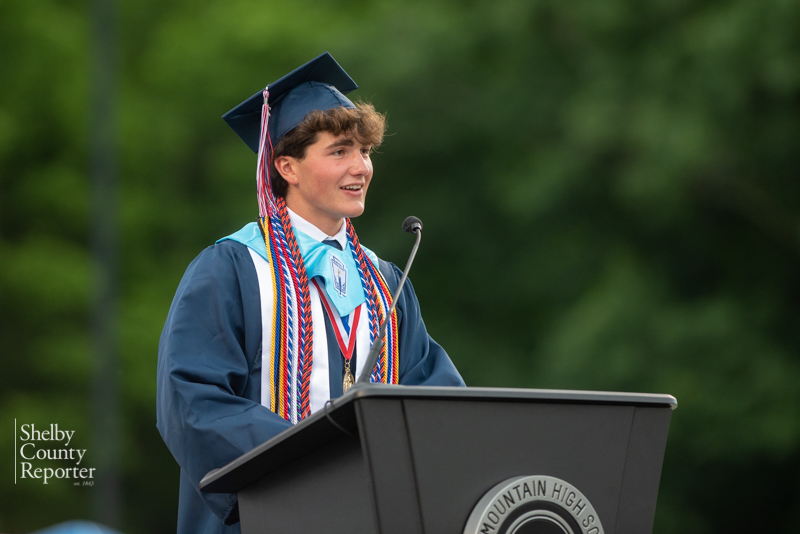 NORTH SHELBY – Standing in front of 397 classmates and their family and friends, Peter Anella looked out over the crowd at Heardmont Park on May 26 and began to speak.

“When I sat down to write this speech, an hour ago, I wanted to make it a life-changing moment with fireworks, a live band, dancers, but unfortunately, that didn’t work out,” Anella said.

Instead, as a soft music began to play underlying his valedictorian speech at Oak Mountain’s commencement ceremony, Anella took everyone on a journey through the past four years and the lessons learned through trying to fit in, losing his dad to cancer and facing a pandemic.

“For me, these four years have totally changed who I am as a person and created a new version of myself that I am pleased with,” he said. “While reminiscing on this transformation, I realized each year gave me a very important life lesson.”

Anella said it was the first time he had to buy clothes after attending a catholic school with uniforms up to that point. He bought Aftco clothing and other fishing clothes because he thought that was the cool thing to do.

“I wanted to be cool and fit in,” Anella said.

And that’s what brought him to his first lesson.

“Don’t care about what other people think,” he said. “Freshman year is all about trying to fit in. People try to fake an identity that they think others will like. All that creates is fake friends and non-stop gossip. Be who you want and the right people will come to you. It’s the law of attraction. Real equals real and fake equals fake.”

Anella said he learned quickly, that despite what he thought, nobody really cared.

“And in reality, no one really pays as much attention to you as you think they do,” Anella said, getting a chuckle from the crowd. “I know I’ve caught myself thinking that all of my actions are closely watched under the scrutiny of others, but in hindsight realized, no one cares. Everyone is focused on their own lives and problems and are too busy to care about yours.” 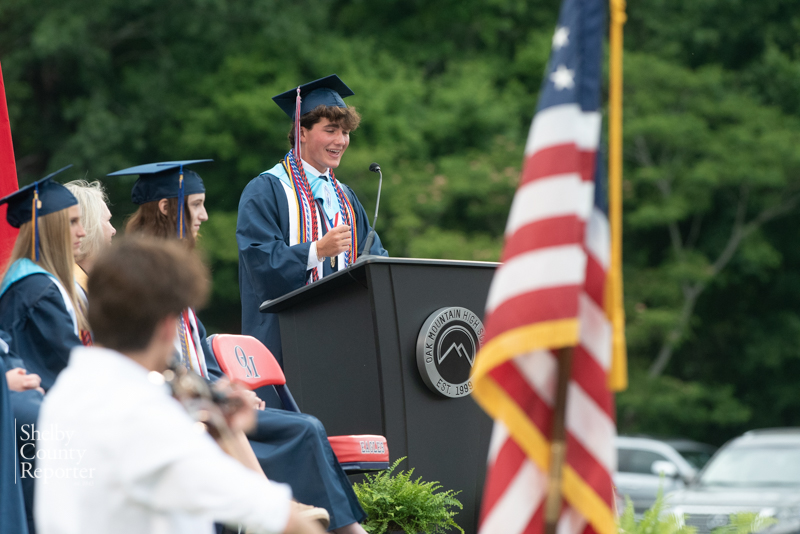 Three weeks into the schoolyear, Anella’s dad was diagnosed with stage four lung cancer and just a couple months to live.

“Well, so much for my best year ever, right? How could anything be good after that?” he questioned.

But that led to his second lesson and so much more, as Anella’s sophomore year featured some major obstacles, but also set the stage for his role making a difference in the lives of others.

“Mindset and attitude are everything. There is a quote I read in the midst of all this happening that said, ‘Unhappiness doesn’t come from the situation; it comes from the attitude about the situation,’” he said. “That really turned everything on its head for me. This challenge that appeared in our family’s lives seemed only bad because that was the easiest thing to look at. In life, there’s two sides to everything—a good one and a bad one. I decided to look at the good one.”

Anella said the year ended up being great because his dad lived 15 months instead of two.

“We were able to travel together and make lasting memories,” he said. “I got super close with my faith, created an unbreakable bond with my family and really grew as a person. Now yes, a lot of bad stuff happened and there were many obstacles. But why focus on the negative when you can focus on the positive?”

His positive eventually became turning the heartbreak of losing his dad into a charity that is impacting the lives of many battling cancer.

“Now we are feeling good. No stress about college yet, almost the top dog of our school and no longer having the stigma of an underclassmen. We were doing well,” Anella said. “Then, bam. A global pandemic that shut down the entire world and slapped us across the face. Hey, why not, right?

He then joked about the schoolyear ending early and not having to take finals, but turned to the doom and gloom of spring break 2020 getting canceled.

With all of his free time, however, Anella and three of his senior classmates decided to try and start a charity known as The Cool Cat Club despite many places completely shut down due to COVID-19.

This is what led to his third lesson of high school: You can do anything you want to in life if you work hard enough for it and don’t give up.

“I know this is cliché, but tell me one person you know that never quit and lost. You can’t because it doesn’t happen. The problem is, people give up before they reach their goals,” he said. “The people we see on TV or on yachts are the ones who didn’t quit. Or, they inherited a giant trust fund, but that’s beside the point.”

The charity, which was started in memory of his father who was known as a cool cat, was started to help raise money for cancer research while also providing different items to cancer patients staying away from home.

But it wasn’t an easy task.

“Starting a charity in the heart of the pandemic was insane and many even called it unintelligent, but we did it anyway, and, it didn’t really work at first,” Anella said. “We were cold calling hundreds of business trying to network and learn what the heck to do. And maybe, if we were lucky, getting a small donation here and there.”

The group, however, decided that giving up was not an option. And by sticking with their goal, The Cool Cat Club has now expanded from one hospital to 13 across Birmingham and Tuscaloosa and has raised more than $50,000 for cancer patients all in less than a year.

“My dad always said to me, the only limitations are the ones you put on yourself,” he said. “That mindset allows you to accomplish anything.”

“What a weird one. There are many words to describe this year, but administration made me remove them from my speech,” Anella said, drawing a big laugh from the audience. “We had no homecoming, social distanced everything and had a lot of protocols. But, we made it great. We were able to still have football games, half of us never even came to school and all of the tests were on Quizlet… I mean online. It was great in my eyes. Yes, it could have been better, but it’s what we were dealt and we played it well.”

With all of that reflection, Anella realized just how fast everything had gone, bringing him to his last lesson—life is short.

It’s crazy to think that we are already adults and about to experience the world. This year showed me that time really does go by fast,” he said. “Before we know it, we’ll be 40 years old and thinking to ourselves, ‘What the heck just happened?’”

Because of that, he realized and urged his fellow classmates to realize that stressing about the small things in life isn’t worth it.

“We are taught to live by so many rules and make sure we get a good paying job, have kids, get a house, dadadadada. But no one ever says just to enjoy life,” Anella said. “When we go to bed every night, we expect the sun to come up the next day, but one day it won’t. Hopefully a while from now, but when that time comes, I know I’m not going to be the guy that has regrets, and I hope y’all won’t either.”

Using each year as a teaching point to himself, Anella overcame several obstacles to earn his spot as valedictorian, while balancing a charity, his own business and losing his father.

With those lessons, he told the class of 2021 that the future is there’s for the taking. They can be whatever they want to be.

“This is an exciting time in our lives,” he said. “We are 18 and have so much ahead of us. Every door is open and our futures can be whatever we want them to be. As we close this chapter of our lives, we open a brand new one, and I wish you all the best of luck.”