From a Scout to the Guard: Bowen volunteers for 35-plus years 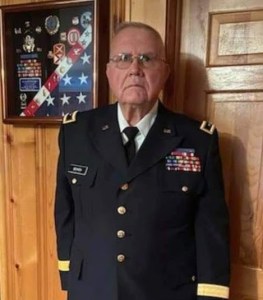 “It’s all about the soldiers, that is why I am still involved with the Employer Support of the Guard and Reserve (ESGR),” said Mark Bowen.

A volunteer since 1985, Bowen’s role is visiting the Armories. He conducts pre- and post-deployment briefings, as well as the annual briefing, making sure that soldiers understand their rights.

In addition to work with ESGR, Mark served on the Clay County Board of Education for eight years. He taught Sunday School at Lineville First United Methodist Church for 40 years. Mark received his pilot’s license in 1968. He has been the proud owner of a Cessna and Beech airplane. During his days of flight, Bowen ventured all over the country. He is also an antique car enthusiast. He owns three 1930s Ford trucks: a 1930 Sports Coupe, 1931 four-door and a 1936 Five Wonder Coupe.

In 1956 at the age of 16, Bowen joined the National Guard. His mother signed for him to join but was not so happy to see him go, Bowen recalled.

“I went from Boy Scouts to the National Guard,” he added. Over the next 49 and a half years, Bowen excelled in the military. He went from being enlisted to becoming an officer, from Sergeant to Lieutenant and eventually Major General.

“I commanded every level in the National Guard,” he remarked. “I loved it,” he said, describing the experience.

Bowen attended Auburn University where he earned a Bachelor of Science in pharmacy. Bowen was a pharmacist for 34 years, retiring in 2000.

“You got to make a living,” Bowen explained about his tenure as a pharmacist. Although retired for the past 20 years, Bowen has maintained his license as a pharmacist by completing 15 hours of continuing education annually. He works as a relief pharmacist when called upon.

The middle of three children, 81-year-old Mark has been married to his wife, Sandra, for nearly six decades. Their union blessed them with two children and three grandchildren.