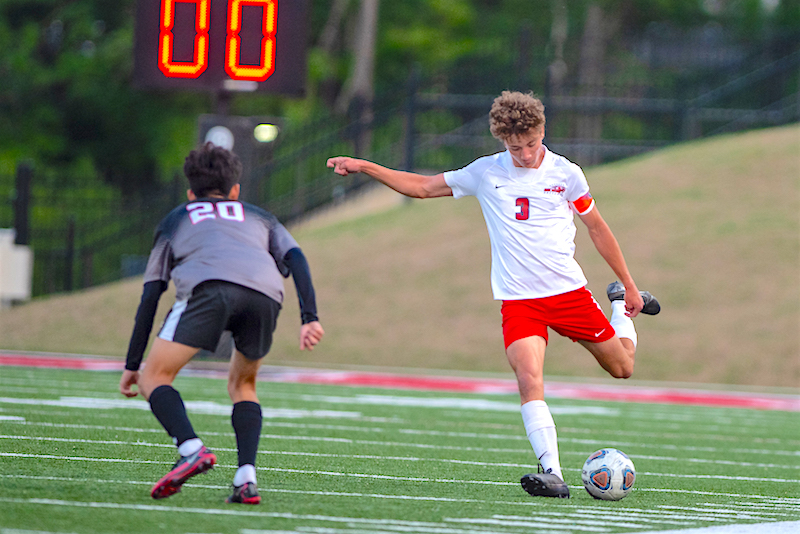 Oak Mountain's Seth Acton, above, was one of many to be honored on this year's All-County boys soccer team, featuring the top players from the 2021 season. (Reporter photo/Keith McCoy)

Since 1997, Shelby County has had at least one boys or girls soccer team win a state championship, making it even more heartbreaking when the 2020 season was canceled more than a month before several top-ranked teams were set to compete for another championship.

But it made the buildup for the 2021 season that more exciting, and this year didn’t disappoint.

With both the Spain Park and Indian Springs boys bringing home state championships this season, we got to see two teams hoist blue maps in the air from the boys’ side.

It continued a strong stretch of eight years in a row with at least one boys team from the county winning a championship. This year also saw five teams make the playoffs as a whole, with three of those five making it to the Final Four in Huntsville.

It was a remarkable and historic year, and none of that would have been possible without some of the best players in the state leaving it all on the field.

We honor those players on this year’s All-County boys soccer team below.

Forward: Jackson Nabors, junior, Indian Springs. This year’s Player of the Year, Nabors not only scored a jaw-dropping 52 goals but added 23 assists. He scored both goals in the state championship win and had assists on both goals in the semifinals to earn the MVP of the Final Four.

Forward: Kaleb Jowers, junior, Spain Park. Jowers was Spain Park’s leader this year with 18 goals and five assists, averaging one goal per game to help lead the Jaguars to their first state championship in school history.

Forward: Matt Reinsch, senior, Chelsea. Reinsch poured in 29 goals this season and added 14 assists in 20 games. He posted six hat tricks and finished with the second most goals in a single season in school history.

Forward: Jackson Webster, junior, Westminster at Oak Mountain. With 24 goals this season, Webster led the Knights and did it against some of the best teams in the state. He also added 13 assists and three hat tricks.

Midfield: Nathan Tozzi, junior, Indian Springs. Not only did Tozzi score 24 goals this season, but matched that with 24 assists as a crucial part of this year’s state championship.

Midfield: Marvin Avalos, junior, Pelham. The engine of the team, Avalos scored seven goals and had 14 assists for the Panthers this season, sparking many of the team’s attacks.

Midfield: Chris Nettuno, senior, Chelsea. Nettuno finished second on the team with 14 goals and tied for the team lead with 14 assists. He also added 25 key tackles in the midfield against some of the state’s best teams.

Defender: Alan Melendez, junior, Spain Park. Melendez continued to show his dominance this season as the county’s top defender. He had 63 tackles and added six goals and four assists offensively with game-winning goals against Oak Mountain and Grissom in the playoffs.

Defender: Riley Alexander, senior, Indian Springs. Alexander was the top defender on a team that gave up just 10 goals in 25 games, including 20 shutouts. He also added eight goals and seven assists.

Defender: Luke Gentile, senior, Thompson. The top defender for the Warriors, who competed against one of the state’s most difficult schedules. He posted nine clean sheets in 17 games.

Goalkeeper: Sims Tosh, junior, Indian Springs. Indian Springs’ season wouldn’t have been possible without Tosh’s effort in net. He had 70 total saves for an individual state record. He had 22 clean sheets, including nine in a row, and saved three of six PKs.

Forward: James Solorio, sophomore, Helena. Solorio was the top goal-scorer for the Huskies with 17, while he also added nine assists. He put up those numbers while missing four games due to injury.

Forward: Logan Edwards, senior, Spain Park. Edwards missed the final eight games due to injury, but came into the season as one of the top players in the state. He totaled seven goals and two assists in his time this year and is one of the top forwards in the county.

Forward: Gio Hernandez, sophomore, Montevallo. Hernandez scored the majority of the Bulldogs’ goals this season, and if he didn’t score, he assisted on the others with six assists as well.

Forward: Sam Jaragui, senior, Briarwood. With 13 goals and four assists, Jaragui led the Lions against one of the state’s most difficult schedules this season.

Midfield: Zane Cooper, senior, Calera. Cooper was the top goal-scorer for Calera this season with 14 goals, while he also added seven assists.

Midfield: Jahir Hernandez, senior, Thompson. Hernandez was set to be one of the county’s top players this season and a leader for Thompson’s attack before tearing his ACL early in the season. In seven games, however, he still scored seven goals and had two assists.

Midfield: Cesar Gonzalez, sophomore, Helena. Gonzalez finished second for the Huskies with 15 goals and eight assists this season as a sophomore.

Midfield: Gus Colvin, sophomore, Indian Springs. Behind 16 goals and 19 assists, Colvin was key to this year’s state championship and finished third on the team in both categories.

Defender: Crawford Merk, senior, Westminster at Oak Mountain. Merk was the top defender for the Knights this season, shutting down some of the state’s top forwards and only giving up one goal.

Defender: Jose Gallardo, junior, Calera. Gallardo was the top defender for the Eagles this season, who challenged some of the top teams in the area, including both Helena and Pelham.

Goalkeeper: Braden Troxell, senior, Pelham. In goal for the Panthers, Troxell put together 12 clean sheets and had one PK save to help Pelham reach the Final Four this season.