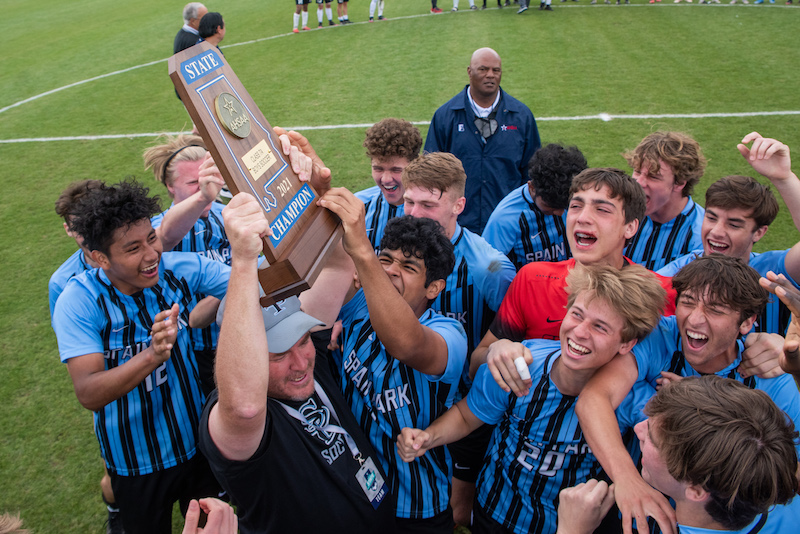 Spain Park head coach Matt Hall hoists the 2021 Class 7A State Championship trophy in the air surrounded by his team after leading the Jaguars to their first tile in school history. He has been named this year's boys soccer Coach of the Year in Shelby County. (Reporter photo/Keith McCoy)

HOOVER – When Matt Hall took over as the Spain Park boys soccer coach in 2014, he knew the job would have its challenges in the soccer-rich area he was coaching in, but the former Jags’ assistant knew the program and cared about turning them into champions.

He didn’t just want to do it for himself or for the players that were there in that moment, he wanted to do it for everyone who had come through the program and was still set to play for him.

Seven years later, Hall, who has been a member of the coaching staff with the Jaguars for 17 years, reached the pinnacle when he helped Spain Park make school history this spring with its first boys soccer state championship.

“I’ve been here a long time. The support has been great and awesome,” Hall said after the championship win. “I’ve been working with kids a long time, and through soccer and sports, you try to teach the kids sportsmanship and we have alumni that still contact us. This is such a great state with great players, so it just means so much to finally reach the top height to bring the first state soccer title for the guys in school history is awesome.”

The championship win was just a small part in a remarkable season featuring one of the deepest and most balanced rosters in the state.

He led the Jags to a 19-1-3 season this year, with that lone loss coming to Hoover two weeks into the season.

Hall helped Spain Park redeem that loss in the semifinals at the Final Four with a 2-1 win, giving the Jags a chance to compete for the state championship a day later.

With the 2-1 win against Davidson in the title match, Hall finished off one of the county’s most historic seasons and did more than enough to earn the award of Coach of the Year in Shelby County this season.

Hall and Indian Springs coach Rik Tozzi were the top two candidates for the award with both winning state championships this season, with Indian Springs setting state records in the process, but the Jags did it for the first time, which made the difference.

But Hall led the Jags on a historic run that the school had never seen before.

Due to COVID-19, they missed out on a strong chance last season, but this year, they more than made up for it with their best run to date.

In school history, Spain Park had only made the second round twice before this season, once in 2012 and a run to the semifinals in 2008.

Hall has now joined an impressive club of coaches to win a state championship from Shelby County, and he will have several playmakers back next year looking to make it two in a row.