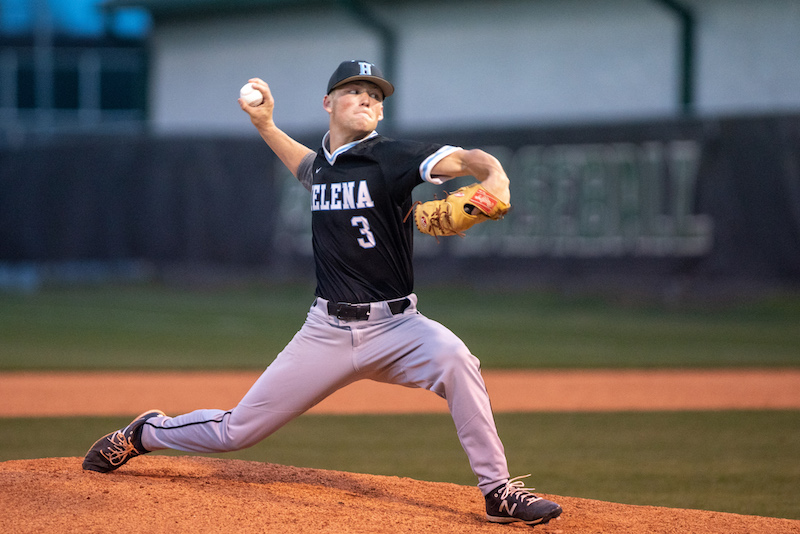 Helena's Jacob Peters finished his season with a perfect 8-0 record on the mound and was one of many talented players named to this year's All-County baseball team. (Reporter photo/Keith McCoy)

Across the county, players returned to the diamond this season with a renewed sense of excitement.

After last year was cut short due to COVID-19, several teams felt like they missed out on the chance at winning a state championship after ending the season ranked highly.

This year, however, several came back ready to make up for lost time and it showed on the field with inspirational efforts from some of the state’s best athletes.

Below, we honor the top players from Shelby County on this year’s All-County baseball team.

Pitcher: Connor Ball, senior, Chelsea. This year’s Pitcher of the Year, Ball finished off his playing days at Chelsea with a county-high 128 strikeouts to finish his career with close to 300. He went 6-4 on the mound with a 1.90 ERA.

Pitcher: JP Fox, senior, Shelby County. Fox was crucial in a run to the quarterfinals for the Wildcats. He tied for the most wins in the county with a record of 8-4 and finished with the second lowest ERA at 1.18. He also finished the season with the second most strikeouts in the county at 90 and finished tied for the most shutouts with three. He also held a batting average of .402 at the plate with 27 RBIs and a county-high 17 doubles.

Pitcher: Jacob Peters, senior, Helena. With an 8-0 record on the mound, Peters was automatic for the No. 2 Huskies this season. He held an ERA of 1.37 and totaled 62 strikeouts with one shutout.

Pitcher: Brock Hill, senior, Chelsea. The perfect No. 2 for Chelsea, Hill finished this season with a 7-4 record against a difficult schedule and added the third most strikeouts in the county with 83. He added an ERA of 1.62 to a strong stat line.

Catcher: Tyler Jon Santos, senior, Helena. The top catcher in the county this season, Santos held a batting average of .391, which was the second best on the team.

Second Base: Eyan Davis, junior, Vincent. Davis had the second highest batting average in the county this season at .440 and held the highest on-base percentage at .579. He totaled 31 RBIs and finished second in the county with 22 stolen bases.

Shortstop: Brody Moss, senior, Helena. A leader for the Huskies, Moss finished with a team-leading average of .400 this season and knocked in 30 runs behind 10 doubles, six triples and three home runs. He also scored a county-high 44 runs and finished fourth in the county with 42 hits.

Third Base: Eli Steadman, senior, Briarwood. With a .391 batting average, Stedman was the leader offensively for Briarwood this season. He totaled 21 runs and 15 RBIs with an on-base percentage of .543.

Outfield: Griff Minor, senior, Helena. The outfield at Helena may have been the best in the state, and it starts with Minor. He finished the season with a .371 average, 19 RBIs and 15 runs scored.

Outfield: Ryan Storey, junior, Helena. Story batted .351 for the Huskies and finished second on the team in RBIs and runs scored with 27 and 26, respectively. He had six doubles and two home runs as part of 34 hits this season and posted 11 stolen bases.

Outfield: Matthew Windham, junior, Calera. The biggest threat at the plate for the Eagles this season, Windham finished with a .386 batting average. He had 32 hits, 26 RBIs and 23 runs scored. He led the team with seven doubles and three triples and added one home run.

Designated Hitter: Davis Gillespie, junior, Oak Mountain. Gillespie had a lot of pop in his bat this season, posting 14 doubles, five triples and four home runs to finish in the top three of each category. He also had a batting average of .346 and drove in county-high 40 runs after finishing second in the county with 44 hits.

Pitcher: Matthew Bullard, junior, Calera. Bullard passed the eye test more than any other pitcher this season, going toe-to-toe with the best in the state. He finished the season 3-0, but missed out on other wins with little run support. He had the county’s lowest ERA this season at 1.07 and totaled 65 strikeouts in just 42 1/3 innings.

Pitcher: Aiden Poe, eighth grade, Vincent. Just an eighth grader, Poe held a record of 3-3 with an ERA of 2.27 this season. His 81 strikeouts in 49 1/3 innings were what stood out against players at the plate with multiple years of experience. He also had two shutouts and one no-hitter.

Pitcher: Connor Aderholt, junior, Shelby County. Aderholt put together a remarkable season on the mound for the Wildcats thanks to a 7-3 record and 74 strikeouts. He also had an ERA of 1.54 and the county’s lowest WHIP at 0.81. Aderholt added three shutouts and one no-hitter.

Pitcher: Connor Adams, senior, Oak Mountain. Adams finished with a 6-3 record and an ERA of 1.46 this season. He totaled 78 strikeouts and had two shutouts with a WHIP of 0.97 to lead the Eagles.

Catcher: Ben Pearman, sophomore, Thompson. Just a sophomore, Pearman went up against some of the best teams in the state and posted a batting average of .327 with 32 hits and 27 RBIs this season. He totaled 11 doubles, one triple and one home run.

First Base: Reid Gongwer, junior, Chelsea. When Chelsea needed a timely hit, Gongwer always seemed to come through. He finished the season with a batting average of .342 to lead the Hornets and totaled 18 RBIs and 25 runs scored on 38 hits, including four doubles. He also added 17 stolen bases.

Second Base: Matthew Pearson, junior, Shelby County. Pearson was one of the top second basemen in the county this season with a batting average of .303. He drove home 23 runs on 30 hits, including 11 doubles and one home run. He also scored 35 runs and stole 13 bases.

Shortstop: Logan Braunschweig, senior, Thompson. The top hitter for the Warriors, Braunschweig had an average of .391 at the plate and finished third in the county with 43 hits. He also led the county with 25 stolen bases and had 28 walks for an on-base percentage of .507. He totaled 18 RBIs and 34 runs scored.

Third Base: Jackson Webster, senior, Chelsea. Webster also had big hits for Chelsea this season and finished with 40 total. He held an average of .315 at the plate and posted 26 RBis, 30 runs scored, nine doubles and three home runs.

Outfield: Trey Puckett, senior, Thompson. Puckett finished this season with a batting average of .313 and totaled 20 RBIs on 31 hits, including 11 doubles. He also added 20 walks and 17 runs scored.

Outfield: Zack Carlisle, sophomore, Vincent. Carlisle finished the season with 28 RBIs on 32 hits, including six doubles, two triples and two homes. He held an average of .333 and scored 29 runs.

Outfield: Noah Gwin, senior, Helena. Gwin held a steady average of .333 at the plate for the Huskies this season thanks to 26 hits. He totaled 15 RBIs and 24 runs scored.

Designated Hitter: Maddox Macrory, junior, Oak Mountain. A dangerous threat at the plate, Macrory had 38 hits this season, including 10 doubles and two home runs. He posted a batting average of .376 and had 30 RBIs and 20 runs scored.

Designated Hitter: Cody Posey, senior, Montevallo. Posey was the leader at the plate for Montevallo this season thanks to a batting average of .370. He totaled 31 RBIs on 27 hits, including 10 doubles and three home runs, while adding 21 runs scored and 24 walks.