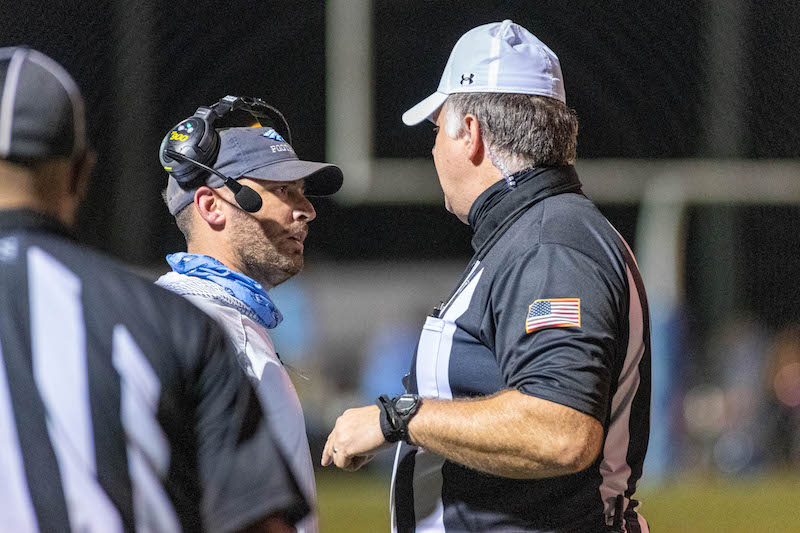 Calera High School is searching for a new head football coach after Trey Simpson, above, joined Thompson High School in an athletic administration role. (For the Reporter/Neal Wagner)

Simpson spent the previous two years coaching the Eagles after taking over for Andrew Zow ahead of the 2019 season.

But during his time at Calera, Simpson was also the team’s baseball coach during the 2017 and 2018 seasons and eventually became the school’s athletic director.

That followed time at Montevallo where he also served as the head baseball coach and athletic director for the Bulldogs.

Now, he’ll join ACS and Thompson High School in an athletic administrative role alongside athletic director Vincent Pitts and others in the department, while also continuing his role as a special education teacher.

“He has a lot of rich athletic administration experience,” Thompson Principal Dr. Wesley Hester said. “He’s been involved in multiple sports arenas as far as coaching goes, but he’s also shown success in athletic administration. When I was principal at Montevallo, I appointed him as athletic director there because of his potential.”

That potential was something he took with him to Calera as a baseball coach, athletic director and football coach.

During his time with the Eagles, he helped the baseball program reach the quarterfinals of the playoffs in 2018 and then started to turn the football program around the previous two seasons in the 6A classification.

But when the opportunity opened at Thompson for an athletic administrator and a special education teacher, Hester and Simpson both knew it was the right fit.

“We had the opportunity to bring him in here, and he was interested in getting into athletics administration working closely with coach Pitts,” Hester said. “Working with him before, it was a fortunate opportunity for us to have this chance to bring him on board.”

With one of the state’s largest high school athletic programs at the Class 7A level, Hester said it would be beneficial for the school in many ways.

“I thought he and coach Pitts would form a really good team and relationship to help us grow Thompson athletics,” Hester said. “We also add a fantastic teacher to our school building. Instructionally, what we do, it’s a huge win and a home run for us to bring someone in that is as quality and professional Trey is.”

Simpson will be heavily involved in helping with operations and administration of several different sports, which Hester said will be a huge help.

It marks the second time in the last three seasons that the Eagles will be looking for a new head coach in the month of June as Simpson took over the job from Zow in June 2019.

Local schools have some of state’s, country’s top recruits