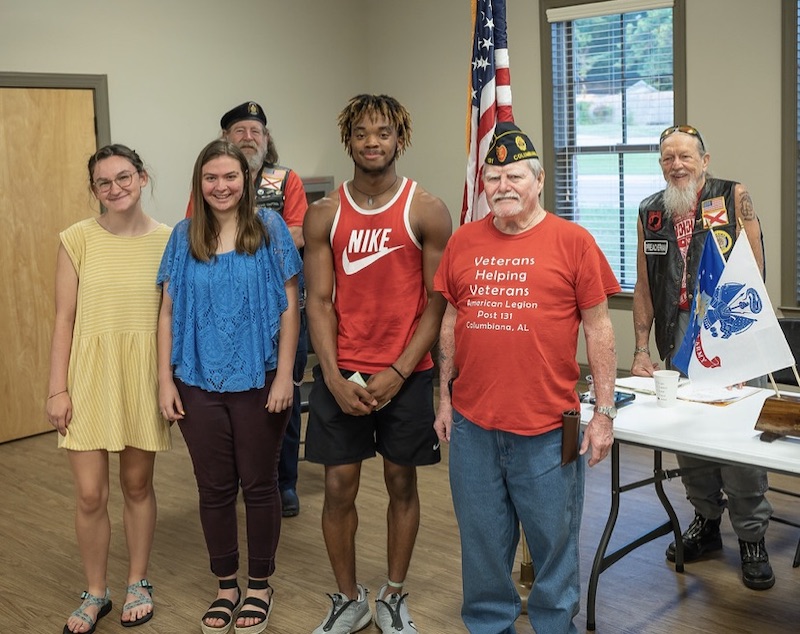 Three of the four recipients chosen for the first scholarships given by Post 131, each at $500, were able to attend a ceremony in their honor: Carrie Nesbitt, Jordan Fussell and Isaac Montgomery. Austin Hockman was unable to attend but was also awarded a $500 scholarship. (Contributed)

The Columbiana American Legion Post 131 and American Legion Riders have been growing their ranks these last two years and with that growth, they have continued to grow their commitment and support to their own community.

The most recent evidence of this growth has been in helping four local Shelby County High School students on their journey to higher education.  Post Commander Sam Horton shared his desire to provide a scholarship to a local student this year, and the members of the post quickly embraced the idea. Sam however, caring for his wife’s medical needs, passed the project on to Chaplain Tom Barnes to execute once the club decided to act on the idea.

Barnes, also the director of the American Legion Riders pulled together a committee of members to raise the funds for the scholarship and one scholarship became four.

“We were so grateful to local businesses, and local citizens, and one very gracious anonymous donor for being so willing to provide for this project,” Barnes said.

Being the inaugural year for the scholarship, the club learned a lot about fundraising and creating an application process. Member Lisa Hairston took on the job of partnering with the school counselor to find possible candidates. Candidates were given applications, and the club as a whole participated in a “blind vote” on the applicants to ensure that no favoritism entered into the selection process.

The applicants were chosen on both merit and need, as well as essays they had to provide as part of the application. The first four recipients of the annual scholarships, each receiving $500 for the school they were accepted to, were Carrie Nesbitt, Isaac Montgomery, Auston Hockman and Jordan Fussell.

On June 27, the Columbiana American Legion held a presentation ceremony for the students and the Legion Auxiliary, led by Donna Barnes, provided a light reception afterwards. During the ceremony, many “in memoriam” gifts were recognized that were given by loved ones who contributed to the scholarships.

“We were so pleased by how personable and friendly each of the students were that evening,” Tom Barnes said. “We had a really good feeling about our choices, and the feeling that it gave us all to help with these kid’s futures is something we look forward to doing again next year.”

Scholarship recipient Jordan Fussell, one of those receiving the $500 scholarship, is headed to Auburn this fall to begin studies to become a veterinarian.

Fussell said, “I’m so thankful for every group that provides this kind of help to students. The American Legion has helped me get one step closer to my dream. It was so good to meet them all at the ceremony and see the people who are willing to help me reach a big goal.”

Post 131 meets every second Monday at 7 p.m. at the Columbiana Senior Center. Vets are welcome to visit. If you are interested in contributing to the American Legion Scholarship fund, reach out to Tom Barnes at 205-337-6156.