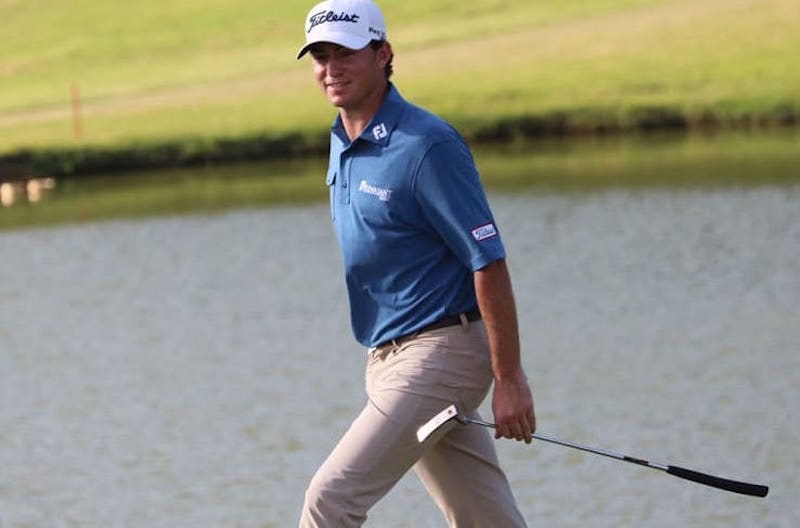 Michael Johnson, a former golfer at Spain Park and Auburn, has qualified for the 2021 U.S. Open at Torrey Pines. (Contributed/PGA Tour)

The former Auburn and Spain Park golfer showed his mental and physical toughness during what turned into a two-day qualifying event June 7-8 by beating out several current professionals to earn a spot in this year’s U.S. Open Championship.

“It was really cool. It honestly really hasn’t hit me yet,” Johnsons said. “I’m sure it will hit me when I pull up to Torrey. I was so focused on just trying to get through the round that I wasn’t really thinking about making it but staying in the moment.”

It marked the end of a grueling two days for Johnson, who has spent time on different tours associated with the PGA Tour trying to get his tour card, but had battled different obstacles.

The U.S. Open, however, offers the opportunity for any professional or amateur who has a handicap of 1.4 or lower the chance to qualify for one of golf’s four major championships.

Johnson took advantage of the survive-and-advance playoff style format, competing in a local qualifier at Callaway Resort & Gardens Mountainview Course, shooting a 4-under par round of 67 to advance to the final stage of qualifying.

Needing a top-eight finish, he was able to finish in a tie for third to advance.

That led to him choosing possibly the most dangerous field when he decided to go from there to Columbus to compete in the final qualifying stage.

With 120 players competing in the qualifier, many were PGA Tour professionals with the Memorial Tournament at Murifield Village in Dublin, Ohio just finishing the day before.

But, it offered the most qualifying spots of any qualifier with 16 players set to advance.

“It’s a pretty popular one to do because it’s the Monday after the Memorial, but I chose to go there because 16 spots were available,” Johnson said. “The one in Atlanta only had five spots available.”

But the tournament became a grinding process.

Set to play 36 holes on Monday, Johnson put together a flawless first 18 in his opening round thanks to a 7-under 65.

Then, after driving 20 minutes to a different course for his second round, he got off to a strong start with two more birdies to reach 9-under.

He fell back, however, with a bogey and double bogey to close out the opening nine of the second round.

With darkness approaching after 8 p.m., Johnson went on to make two birdies and one bogey through his first five holes on the back nine to get back to 7-under before the day was called due to darkness.

Johnson had four holes left to play and was inside the qualifying line at the time, but had to sleep with that anxiety and a spot in the U.S. Open on the line.

“I knew if I made pars on my last four holes, I would likely make the U.S. Open, so that was an interesting night for me,” Johnson said. “I tried to get as much sleep as I could, but I’m not sure how much I got. I wasn’t really nervous, just anxious. You can only think about four holes so much.”

Despite the restless night and a crowded leaderboard, Johnson came out and made four consecutive pars to close out the qualifier, which put him at 7-under in a tie for ninth and one shot clear of being forced to compete in a five-man playoff for the final spot.

Of the 16 qualifiers, Johnson joined 14 PGA Tour professionals and one amateur to advance to the U.S. Open at Torrey Pines June 17-20.

In addition to those names, all on the PGA Tour aside from Johnson and Coody, Johnson beat out popular names like Rickie Folwer, Keegan Bradley, Jason Dufner and Padraig Harrington by two strokes to earn a spot.

“It’s pretty humbling because you see these guys week in and week out on Tour and you show up to a qualifier and they’re hitting balls next to you. It’s a humbling a sport,” Johnson said. “Who would have thought five years ago that Rickie would be trying to qualify for a U.S. Open.”

The success means the world to Johnson, who had success in his PGA Tour debut at the Barbasol Championship with a third-place finish, but had since just missed getting his Tour card through the Korn Ferry Tour in 2017 before struggles ensued two yars later.

“It means a lot to me personally,” Johnson said.”2019 was a rough year. I played pretty poorly for five-six months straight and got a new swing coach in 2020 right when the pandemic hit. He’s helped me out a bunch. It’s been nice to see the hard work come to fruition and have some results. I’ve played pretty well this year, and it’s been pretty gratifying to put together some good rounds.”

As for the chance to compete at one of the world’s most famed courses for one of the biggest tournament titles, Johnson said it was a dream come true.

“It’s kind of surreal a little bit because you grow up wanting to be an NBA player and you want to be in the playoffs in NBA finals, and if it’s football you want to play in national championship or a super bowl,” Johnsons aid. “This is kind of the super bowl. Excluding the Masters, this is the biggest out there. You grow up with this dream and do all these putting contests saying ‘This one is to win the Masters, this one is to win the U.S. Open. It’ll be pretty cool to step on the first tee and know I earned a spot to play this year.”

As for his chances at the major championship, Johnson feels like he is playing his best golf and said he can compete for the championship.

“I obviously feel pretty good. It will just come down to if I can execute or come up with a game plan,” Johnson said. “At the U.S. Open, it will be fairways and greens. I will hit a bunch of drivers and practice that a lot because finding fairways out at Torrey is important. I’m feeling good and just need to be in a good head space.”

He also said he knows he’ll be able to lean on the support of everyone back home in Birmingham rooting for him after many reached out and showed their excitement for him following the qualifier.

“It was pretty cool to receive a bunch of text messages and phone calls after the round,” he said. “Birmingham has been great to me, especially after moving back home after school.”