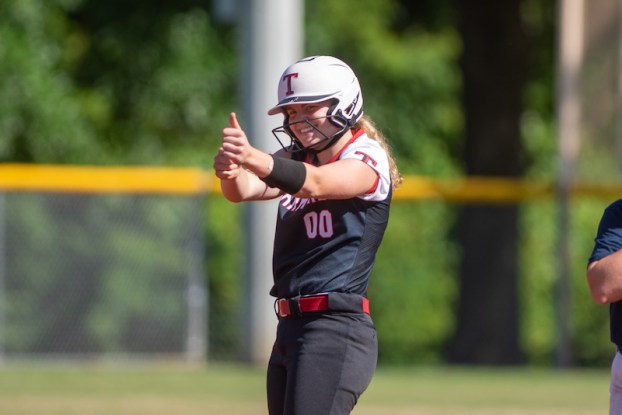 Thompson's Eleanor DeBlock was one of this year's top players in Shelby County, earning her a spot on the All-County softball team alongside several other elite athletes. (Reporter photo/Keith McCoy)

The numbers were staggering this season. Excited to be back on the field after the previous year was cut short, the best softball players from across the county put on a show and displayed their talent as some of the best players in the state.

It led to historic seasons for several teams, including state tournament appearances for both Helena and Thompson.

With more than 20 players holding a batting average greater than .400 and nine posting more than 40 RBIs, the county was treated to a lot of action at the plate, while three pitchers hurled more than 230 strikeouts and four had ERAs of less than 2.0 with more than 20 wins.

That made this year’s All-County softball team loaded with elite talent, which is broken down below:

Pitcher: Annabelle Widra, senior, Spain Park. Widra finished off her playing days at Spain Park with another spectacular season in the circle and at the plate. As the Pitcher of the Year in Shelby County, she put together an ERA of 1.20 with 236 strikeouts and allowed just 30 runs on 63 hits. She finished with a record of 20-5. At the plate, she put together a .490 batting average with 49 hits and 47 RBIs. She tied for the county lead with 15 home runs and added eight doubles and three triples with 51 runs scored. She also had 32 stolen bases and walked 30 times.

Pitcher: Cam Bailey, junior, Helena. Bailey put together a strong season in the circle for the Huskies to help them reach the state tournament. She held a 1.73 ERA and held the most wins in the county with 26 thanks to a 26-7 record. She also totaled 275 strikeouts, which finished second in the county by one strikeout.

Pitcher: Eleanor DeBlock, junior, Thompson. DeBlock also had 25 wins this season and finished with a record of 25-4 with six saves. She posted an ERA of 1.85 and had 172 strikeouts. At the plate, she batted .435 with 40 hits, including nine doubles, and had 20 RBIs.

Pitcher: Maddy Walker, senior, Vincent. Walker had the second lowest ERA in the county this season at 1.26 and posted a record of 22-13 with a county-high 276 strikeouts. She had 11 shutouts and one no-hitter. She also was responsible for a large portion of the team’s offense with a .432 average at the plate thanks to 48 hits. She totaled 32 RBIs and had 11 doubles and six home runs.

Second base: Ella Pate, junior, Thompson. Pate was one of the county’s most dangerous hitters this season. She not only batted .482 at the plate, but totaled a county-high 58 RBIs and notched 67 hits. She also led the county with 18 doubles and added three triples and eight home runs.

Shortstop: Alana Scott, junior, Helena. One of the most dangerous hitters at the state tournament this year, Scott finished the season with a .408 batting average and totaled 28 RBIs with 60 hits. She also led the county with 35 stolen bases, finished second in the county with 17 doubles and had five home runs.

Third base: Allie Tryon, junior, Montevallo. The top hitter for the Bulldogs, Tryon held a batting average of .573 and finished third in the county with 54 RBIs. She finished the season with 13 doubles and 10 home runs.

Outfield: Jenna Williams, junior, Thompson. This year’s Hitter of the Year, Williams put together a batting average of .536 thanks to a county-high 75 hits. She also finished second in the county with 55 RBIs and in a tie for fourth with 14 doubles. She added three triples and four home runs.

Outfield: Dawn Autry, senior, Oak Mountain. Autry was the top hitter for the Eagles with an average of .444 thanks to 56 hits, including 14 doubles, eight home runs and three triples. She also totaled 27 RBIs.

Outfield: Madaline Petrock, junior, Pelham. Petrock finished this season with a .348 batting average behind 32 hits and 27 runs, while adding 10 stolen bases. Defensively, she had a fielding percentage of .978 with just two errors on 92 total chances.

Utility: Lydia Coleman, senior, Spain Park. Coleman was actually the top hitter for the Jags this season from an average standpoint thanks to batting .523. She finished second on the team with 46 hits and totaled 34 RBIs with 43 runs scored. Her hits included nine home runs, four doubles and four triples. She also finished second in the county with 33 stolen bases.

Utility: Kensley Wesley, junior, Shelby County. Wesley held a batting average of .475 for the Wildcats and finished in a tie for third with 54 RBIs this season.

Designated hitter: Dailynn Motes, freshman, Thompson. Another .400-plus batter for Thompson, Motes put together an average of .425 and had 65 hits this season to finish third on the team, including 11 doubles, four triples and two home runs. She also added 30 RBIs and 31 stolen bases.

Pitcher: Hayden Dennis, senior, Montevallo. Dennis was 9-4 for the Bulldogs this season and had 104 strikeouts with four shutouts. She also held a .546 batting average and totaled 15 doubles, five triples and four home runs.

Pitcher: Brianna Copeland, senior, Pelham. In the circle, Copeland held an ERA of 2.08 this season as the top pitcher for the Panthers and totaled 156 strikeouts. She was also one of the top hitters in the county with an average of .562 at the plate as well as 45 hits and 44 RBIs. She also finished tied for the county lead with 15 home runs.

Pitcher: Tyler Erwin, senior, Chelsea. The best player for the Hornets, Erwin put together an 11-7 record in the circle with an ERA of 2.40 and 156 total strikeouts. She also had four shutouts, one no-hitter and one perfect game. At the plate, she batted .433 with 45 hits, including11 doubles and eight home runs. She also added 46 RBIs to her stat line.

Pitcher: Lacy Marty, senior, Oak Mountain. One of Marty’s biggest highlights was her strikeout total against one of the toughest schedules and regions in the state. She totaled 233 strikeouts this season and finished the season with a 19-14 record.

Catcher: Bella Holiday, junior, Helena. Holiday held a batting average of .393 this year, but was most impressive with her 45 hits and 40 runs scored. She totaled 25 RBIs on eight doubles, eight home runs and two triples. She also had 23 stolen bases this season.

First base: Lexie Bullock, senior, Helena. Bullock’s 51 hits were among the best in the county, while she also scored 42 runs and had 38 RBIs. She put together a batting average of .379 this season behind nine doubles, seven home runs and two triples.

Second base: Olivia Bergert, senior, Chelsea. Bergert finished the season with a batting average of .381 at the plate and totaled 32 RBIs on 37 hits with 42 runs scored. She had five doubles, five home runs and two triples.

Shortstop: Paci Clark, sophomore, Shelby County. Clark was one of the top power-hitters this season thanks to 13 home runs and a batting average of .496. She capitalized on her chances with runners in scoring position as well with 32 RBIs.

Third base: Ann Marie Stanbridge, junior, Helena. One of Helena’s biggest postseason threats, Stanbridge put together a .373 batting average this season with a strong 60 hits, including 11 doubles and nine home runs. She also scored 31 runs on the season.

Outfield: Emma Hawkins, freshman, Spain Park. A top defender in the outfield, Hawkins also held a .319 batting average this season with 23 hits, 28 runs scored and 23 RBIs in just 72 at bats. She also had 14 stolen bases and 13 walks.

Outfield: Lucy Spisto, sophomore, Spain Park. Another strong outfielder, Spisto had a .318 average with 21 hits and 26 runs scored. She found ways to get on base and then stole 25 of 27 bases safely once aboard.

Utility: Chloe Brittain, senior, Spain Park. Another strong bat for the Jaguars, Brittain finished her final season with a .340 batting average on 35 hits. She totaled 38 RBIs and had five home runs and four doubles.

Utility: Jordan Douglas, sophomore, Calera. Douglas showed promise as a young player this year thanks to a remarkable batting average of .614 for the Eagles. She totaled 43 hits and 37 RBIs in 28 games played with eight home runs, eight doubles and six triples.

Utility: Katie Flannery, sophomore, Spain Park. Flannery finished this season with a .313 average, but was most importantly key in big situations both in the field and at the plate. She had 36 RBIs, 31 hits and 32 runs scored.

Designated hitter: Maggie Daniel, freshman, Spain Park. Just a freshman, Daniel had 34 hits and 34 RBIs with a batting average of .386.