A call from the right-wrong number

Lola Peoples has been a member of Faith Missionary Baptist Church in Montevallo for over two decades.

She still attends each Sunday. Peoples loves to dress up and going to church is the one occasion that she takes extra care to look especially good in her finest outfits. She has served in several capacities including missionary, choir member and recording secretary.

Peoples recalls with great fondness and pride the opportunity to serve the Montevallo community. Prior to the closing several years ago of the nursing home facility in Montevallo, missionary members frequented the facility visiting residents, conducting services, praying with patients and bringing gifts to them on a regular basis. 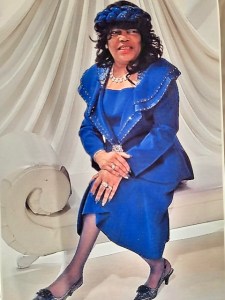 Lola Peoples tries to make a difference in someone’s day, even if that person happens to be the recipient of a misplaced phone call. (Contributed)

Peoples has been a devoted participant in the missions’ programs and is grateful to be in the position to assist those in need as well as support the operations of the programs within the church.  Since developing health issues, Peoples isn’t able to get around as often as she used to; however, she reaches out to others by telephone.

“Sometimes I reach a wrong number and end up having a conversation with a complete stranger. It may only last a few minutes, but I often hear ‘Well, I’m glad you called me,’” Peoples said. “I really enjoy talking to family and friends. I can stay connected that way and say something to help make a difference in the person’s day,” she added.

“It is hard to keep up with the numbers,” she chuckled.

Peoples graduated from Centreville High School in 1967. The couple settled in Montevallo that same year She was employed as a crew chief at a plastic plant in Alabaster for 21 years, and the plant closed in 2000.

“I really enjoyed my position there. I learned how the industry operates and developed different skills. I got to know a lot of people and formed many friendships,” said Peoples. Peoples was also employed as a crew chief/inspector at Bud’s Best Cookies in Hoover for four years.