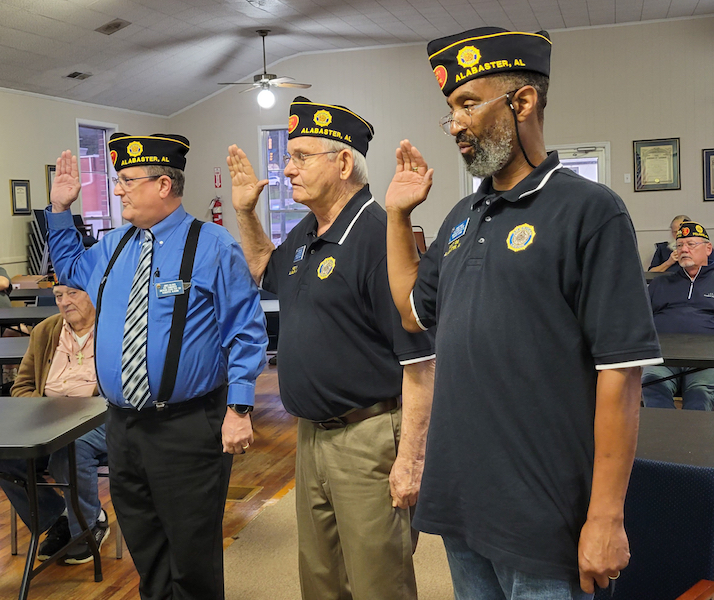 James Billings, Trenton Agee and Charles Knight were sworn into their new positions with American Legion Goodwin-Lee Post 138 on June 10 after a vote. (Contributed)

ALABASTER – American Legion Goodwin-Lee Post 138 welcomed new officers for their upcoming year during a meeting on June 10 at the Alabaster Veterans Center.

Each of these leaders will lead the service organization for the upcoming year in all of the activities, programs and services it provides throughout the year.

Billings previously served as a second vice commander in the organization under Commander Paul Gonthier who was recently elected as the 23rd District Commander.

“I am certainly honored and humbled by the trust that my comrades have shown in me to lead this post and I am excited about where we can go and what we can do for veterans in this community,” Billings said.

Now, as the leader of this post Billings explained that he wanted to further the efforts started under Gonthier including continued support for the Alabaster Veterans Center. He also wants to try and establish a youth basketball program and an oratorical contest for high school students.

“I would love to see the programs here in Alabaster next year,” Billing said. “I would love to bring the oratorical contest for high schoolers and introduce it to Thompson High School and Evangel. I would also love to do have an active riders’ group, which is a motorcycle-based program. Another goal would be to have a strong and thriving auxiliary group. There is so much opportunity here for us over the next year.”

Agee is maintaining his post as first vice commander from the previous administration.

“Trenton Agee has been there from the beginning of this post since it was revitalized back in 2018, and I am so happy that he has decided to stay on,” Billings explained. “I value his experience and wisdom and he is willing to do anything it takes to help our veterans.”

Knight previously served as the post’s service officer, but is now stepping into a new position with the organization.

“Charles is relatively new to us, he actually joined last year, but he has thrown himself into the job and is so dependable and energetic,” Billing said. “He has a passion for helping veterans in our community.”

Billings said it would take new members and volunteers to help make some of these things possible. Anyone that is interested in  joining the post or volunteering should contact the post at post138al@gmail.com or Billings directly at james.thomas.billings@gmail.com.