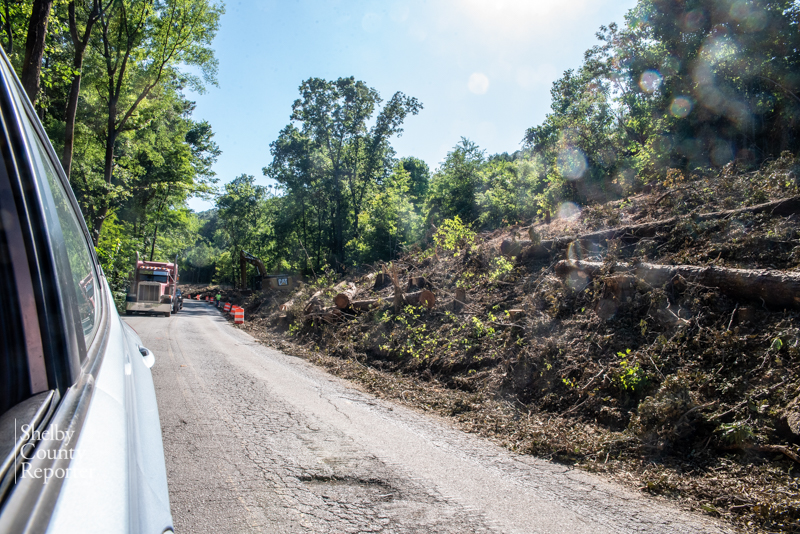 PELHAM – A road project designed to improve a portion State Park Road is having a noticeable effect on commuters as the so-called “tree tunnel” along this route has been significantly altered.

The current road work is part of a project originally approved in 2018 and designed to be completed in three phases. The ongoing work along State Park Road is part of the third phase of that project, which is designed to improve the safety of those traveling along the route.

According to County Manager Chad Scroggins, this phase is all about improving the safety of drivers along the route by clearing out trees to expand the road, adding bike/pedestrian lanes for those who wish to commute that way and eventually installing a roundabout to replace the four-way stop at the intersection of State Park Road and John Findlay Drive.

“The work is about doing a number of safety improvements to State Park Road. There are a significant number of trees that are way too close to the edge of the asphalt to ensure safety,” Scroggins said. “This corrects all of that. We are also adding some pedestrian access improvements. We have a number of people who walk or ride bikes into the state park along that road and this will make their commute safer.”

Citizens had raised some concern online regarding the removal of trees from that area because of the allure and whimsy the trees brought to commuters along the path. According to Scroggins, there was no malice in the removal of these trees; instead it was making up for maintenance that had been avoided for a long time.

“The reason the trees grew in this way is because of a lack of long-term maintenance. That is why we are cutting them back,” Scroggins said. “You could actually see along the trees where bark was missing from cars running into them. By removing these trees, we can expand the right-of-way, which will eliminate something that is a safety hazard.”

Scroggins recalled that when the county was filing the paperwork to move the project along, there was a fatality on that road on the same day.

“It is not worth having the trees that close to the road,” Scroggins said. “Everyone loves a beautiful road like that, but ultimately we have to get the roads to a certain safety standard.”

The roundabout portion of the project is also designed to improve safety and traffic flow along the route.

“There are a lot of people who commute along this route,” Scroggins said. “The roundabout will help to handle that traffic. A lot of that traffic is coming to a stop just to turn right, so this will allow traffic to just continue to flow through.”

The current timeline for the project shows that all parts of it should be completed by the end of this year.