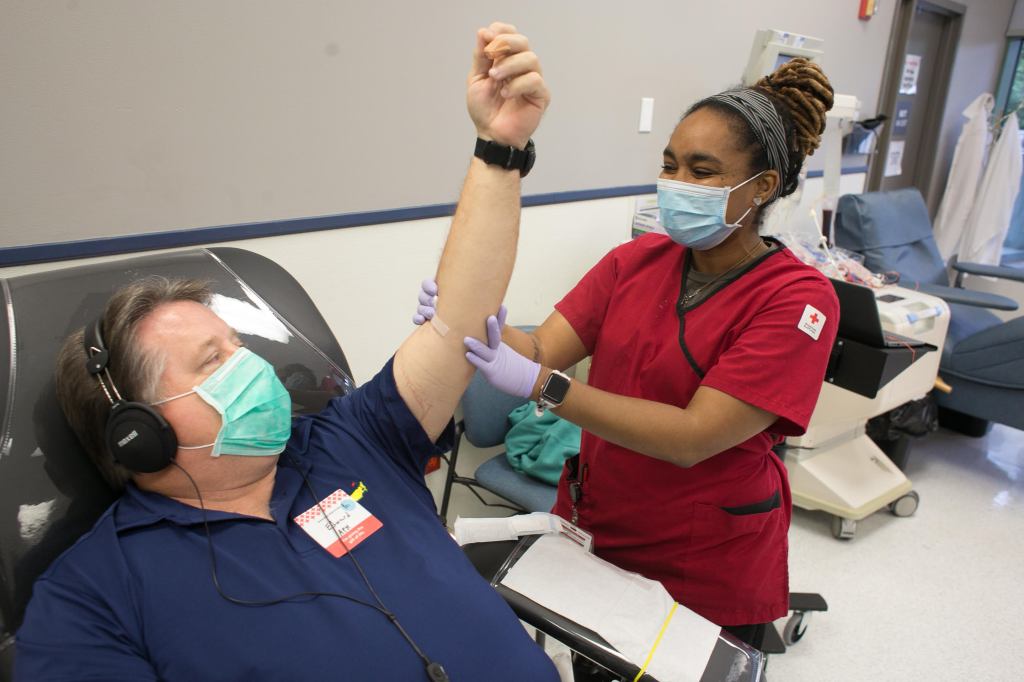 The American Red Cross is asking anyone who can to donate blood due to recent shortages. (Contributed)

The American Red Cross is urging donors of all blood types, especially type O, to schedule an appointment to give as soon as possible following a shortage in the last several weeks.

Annette Rowland, regional director of communications for the American Red Cross, said the ongoing shortage spawned after hospitals nationwide began resuming medical procedures that had either been delayed or halted during the COVID-19 pandemic.

As vaccinations increase and the country begins to reopen, a rise in the number of trauma cases, organ transplants and elective surgeries has required more blood than expected, Rowland said.

“People are rushing to get those elective surgeries scheduled now that we’re seeing this massive reopening, which definitely increases the need for blood,” Rowland said. “We’ve been able to meet those needs so far, but it’s definitely becoming a little scary, because there’s not enough blood.”

Over the last three months, the Red Cross has distributed more than 75,000 blood products to hospitals nationwide, depleting much of the nation’s blood supply inventory in the process. The Red Cross is currently operating around 24-hour stockpile reserves ,but generally requires two or three-day supplies for healthy operations.

Rowland said blood donation centers are currently struggling to replenish supplies due to record-low appointments or frequent donation cancellations, and that blood donations have slipped in priority as the country returns to normalcy.

“It’s the last thing on people’s priority list right now, but we still have hospitals who are going to need that blood. So while I understand everybody’s traveling and booking vacations, we still have to think of people in need and turn out to give blood,” Rowland said.

If blood donations continue to remain low, Rowland said elective surgeries may need to be delayed again or hospitals may have to prioritize emergency cases.

“This is about saving lives and if hospitals aren’t able to get the amount they need, then they might have to make some tough choices,” Rowland said.

Another factor that is contributing to the shortage is that hospitals are currently responding to an atypically high number of traumas and emergency room visits. Compared to 2019, the Red Cross has reported that blood demand from trauma centers has climbed 10 percent in 2021—more than five times the growth of other facilities that provide transfusions.

UAB Hospital is the only level one trauma center in the state of Alabama and is one of the largest users nationally of blood supplied by blood centers, including from the American Red Cross.

Dr. Marisa Marques, medical director of transfusion services at UAB Hospital, said the shortage is of particular concern for the hospital, and that her department relies on blood donations for transfusion operations, specifically relating to cancer and sickle cell patients, emergency surgery and trauma victims. According to Marques, trauma patients may receive 30 or 40 units of blood, a significant percentage of the total supply.

“The patients that have experienced the worst trauma from anywhere in the state come to our hospital and we have even had patients from states like Mississippi, Tennessee and across the Southeast,” she said.

The hospital frequently cares for trauma patients in Jefferson and Shelby County as well as throughout the state. However, due to the pandemic, Marques said that all three of the hospital’s blood suppliers are currently experiencing shortages.

“Blood donation has been severely affected by COVID-19, and as we head into summer — traditionally a time when blood shortages are common — the situation may become critical if donations do not increase now,” Marques said.

To donate blood today, schedule an appointment at: Redcrossblood.org/give.html/find-drive. Those who have received the COVID-19 vaccine are eligible to donate blood.